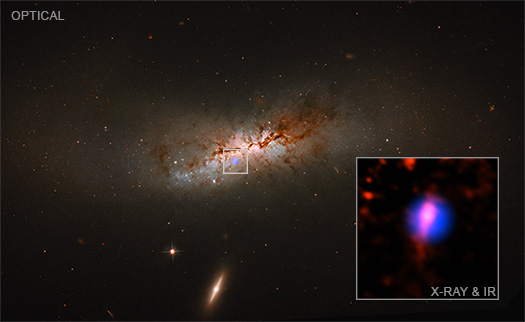 Astronomers may have witnessed a galaxy’s black hole delivery system in action. A new study using data from NASA’s Chandra X-ray Observatory and Hubble Space Telescope outlines how a large black hole may have been delivered to the spiral galaxy NGC 4424 by another, smaller galaxy.

NGC 4424 is located about 54 million light-years from Earth in the Virgo galaxy cluster. The main panel of this image, which has been previously released, shows a wide-field view of this galaxy in optical light from Hubble. The image is about 45,000 light-years wide. The center of this galaxy is expected to host a large black hole estimated to contain a mass between about 60,000 and 100,000 Suns. There are also likely to be millions of stellar-mass black holes, which contain between about 5 and 30 solar masses, spread throughout the galaxy.

The inset features a close-up view of NGC 4424 that shows Chandra X-ray data (blue), plus infrared data from Hubble (red) that has had infrared light from a model of NGC 4424 subtracted from the image to show other faint features. This inset image is about 1,160 light-years across. The elongated red object is a cluster of stars that the authors of the new study have nicknamed “Nikhuli,” a name relating to the Tulini festive period of celebrating and wishing for a rich harvest. This name is taken from the Sumi language from the Indian state of Nagaland. The Chandra data shows a point source of X-rays.

The researchers determined Nikhuli is likely the center of a small galaxy that has had most of its stars stripped away as it collides with the larger galaxy NGC 4424. Nikhuli has also been stretched out by gravitational forces as it falls towards the center of NGC 4424, giving it an elongated shape. Currently, Nikhuli is about 1,300 light-years from the center of NGC 4424, or about 20 times closer than the Earth is to the Milky Way’s giant black hole.

One possible explanation for the Chandra X-ray source in the inset is that matter from Nikhuli is falling rapidly into a stellar-mass black hole. However, because these smaller black holes are expected to be rare in a cluster the size of Nikhuli, the authors argue it is more likely from material falling slowly onto a more massive black hole weighing between about 40,000 and 150,000 Suns. This is similar to the expected size of the black hole in the center of NGC 4424. These results imply that Nikhuli is likely acting as a delivery system for NGC 4424’s supply of black holes, in this case bringing along a massive one. If the center of NGC 4424 contains a massive black hole, Nikhuli’s massive black hole should end up orbiting it. The distance separating the pair should then shrink until gravitational waves are produced and the two massive black holes merge with each other.

A supermassive black hole and star cluster in a galaxy.
About 53.6 million light-years from Earth.
With X-ray light from Chandra and optical/infrared light from other telescopes.
The main image is about 45,100 light-years across and the inset image is about 1,160 light-years across.
X-ray light is blue and optical light is red, green, and blue.
In the constellation Virgo.
Rate This Image
Rating: 4.0/5
(571 votes cast)
Download & Share
JPEG (117.8 kb)
Large JPEG (5.1 MB)
Tiff (26.8 MB)
Handout (pdf)
Image Feed
Visual Description