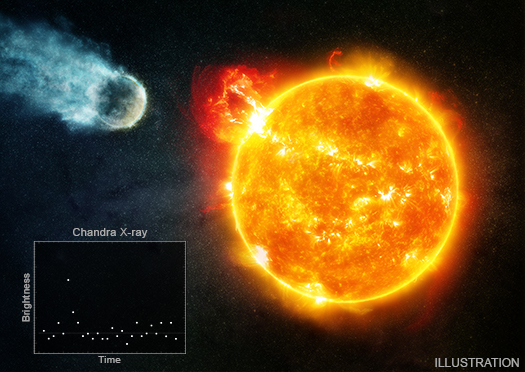 The research team's Chandra observations of Barnard's Star taken in June 2019 uncovered one X-ray flare (shown in the inset box) and their Hubble observations taken in March 2019 revealed two ultraviolet high-energy flares (shown in an additional graphic). Both observations were about seven hours long and both plots show X-ray or ultraviolet brightness extending down to zero. Based on the length of the flares and of the observations, the authors concluded that Barnard's Star unleashes potentially destructive flares about 25% of the time.

The team then studied what these results mean for rocky planets orbiting in the habitable zone — where liquid water could exist on their surface — around an old red dwarf like Barnard's Star. Any atmosphere formed early in the life of a habitable-zone planet was likely to have been eroded away by high-energy radiation from the star during its volatile youth. Later on, however, planet atmospheres might regenerate as the star becomes less active with age. This regeneration process may occur by gases released by impacts of solid material or gases being released by volcanic processes.

However, the onslaught of powerful flares like those reported here, repeatedly occurring over hundreds of millions of years, may erode any regenerated atmospheres on rocky planets in the habitable zone. The illustration shows the atmosphere of the rocky planet being swept away to the left by energetic radiation from flares produced by the red dwarf. This would reduce the chance of these worlds supporting life. The team is currently studying high-energy radiation from many more red dwarfs to determine whether Barnard's Star is typical.

A paper describing these results, led by Kevin France of the University of Colorado at Boulder, appears in the October 30, 2020 issue of The Astronomical Journal and is available online. NASA's Marshall Space Flight Center manages the Chandra program. The Smithsonian Astrophysical Observatory's Chandra X-ray Center controls science and flight operations from Cambridge and Burlington, Massachusetts.