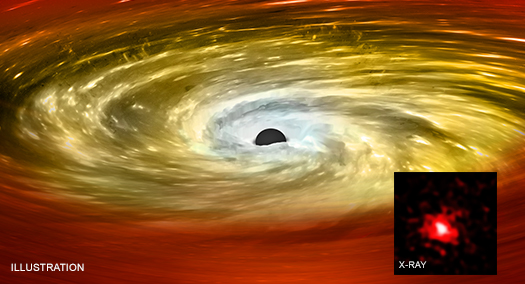 A new study using data from NASA's Chandra X-ray Observatory indicates that black holes have squelched star formation in small, yet massive galaxies known as "red nuggets", as reported in our latest press release. The results suggest some red nugget galaxies may have used some of the untapped stellar fuel to grow their central supermassive black holes to unusually massive proportions.

In the latest research, astronomers used Chandra to study the hot gas in two of these isolated red nuggets, Mrk 1216, and PGC 032673. (The Chandra data, colored red, of Mrk 1216 is shown in the inset.) These two galaxies are located only 295 million and 344 million light years from Earth respectively, rather than billions of light years for the first known red nuggets, allowing for a more detailed look. The gas in the galaxy is heated to such high temperatures that it emits brightly in X-ray light, which Chandra detects. This hot gas contains the imprint of activity generated by the supermassive black holes in each of the two galaxies.

An artist's illustration (main panel) shows how material falling towards black holes can be redirected outward at high speeds due to intense gravitational and magnetic fields. These high-speed jets can tamp down the formation of stars. This happens because the blasts from the vicinity of the black hole provide a powerful source of heat, preventing the galaxy's hot interstellar gas from cooling enough to allow large numbers of stars to form.

I find this information fascinating, it takes me back to my 3rd grade science lesson when I got to study the Milkyway. I felt so small back then and still get that same rush today and I am 65. Thank you