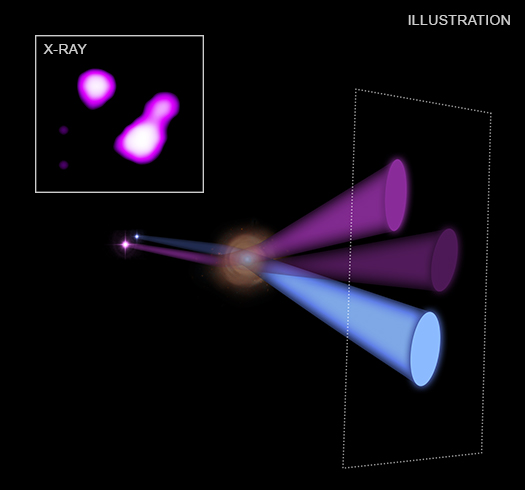 A new technique using NASA's Chandra X-ray Observatory has allowed astronomers to obtain an unprecedented look at a black hole system in the early Universe, as reported in our latest press release. This is providing a way for astronomers to look at faint and distant X-ray objects in more detail than had previously been possible.

Astronomers used an alignment in space that shows "gravitational lensing" of light from two objects that are nearly 12 billion light years away. An artist's illustration in the main part of this graphic shows how the paths of light from these distant objects are bent and amplified by a galaxy along the line of sight between Earth and the objects.

The objects in this latest Chandra study are part of a system called MG B2016+112. The X-rays detected by Chandra were emitted by this system when the Universe was only 2 billion years old compared to its current age of nearly 14 billion years.

Previous studies of radio emission from MG B2016+112 suggested that the system consisted of two separate supermassive black holes, each of which may also be producing a jet. Using a gravitational lensing model based on the radio data, Schwartz and his colleagues concluded that the three X-ray sources they detected from the MG B2016+112 system must have resulted from the lensing of two distinct objects.

The X-ray light from one of the objects on the left (purple) has been warped by the gravity of the intervening galaxy to produce two beams and X-ray sources ("A" and "B" in a labeled version) detected in the Chandra image, which is represented by the dashed square on the right. The X-ray light from the fainter object (blue) produces an X-ray source ("C") that has been amplified by the galaxy to be as much as 300 times brighter than it would have been without the lensing. The Chandra image is shown in the inset.

A paper describing these results appears in The Astrophysical Journal and a pre-publication version is available at https://arxiv.org/abs/2103.08537. The authors of the study are Dan Schwartz (Center for Astrophysics | Harvard and Smithsonian), Cristiana Spignola (INAF), and Anna Barnacka (CfA).