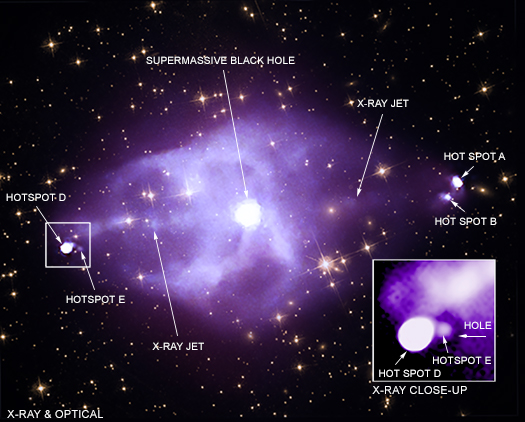 A labeled version outlines the key features described above. The main figure shows the location of the supermassive black hole, the jets, the point that the jet on the left ricocheted off a wall of intergalactic gas ("hotspot E"), and the point where the jet then struck the intergalactic gas a second time ("hotspot D"). The inset contains a close-up view of the hotspots on the left and the hole punched by the rebounding jet, which surrounds hotspot E. The image in the inset combines X-rays from all three energy ranges to give the greatest sensitivity to show fine structures such as the hole.

The hole is visible because the path of the rebounding jet between hotspots E and D is almost directly along the line of sight to Earth, as shown by the schematic figure depicting the view of Cygnus A from above. A similar rebounding of the jet likely occurred between hotspots A and B but the hole is not visible because the path is not along the Earth's line of sight.

Cygnus A is a large galaxy that sits in the middle of a cluster of galaxies about 760 million light years from Earth. A supermassive black hole at the center of Cygnus A is rapidly growing as it pulls material swirling around it into its gravitational grasp. During this process, some of this material is redirected away from the black hole in the form of narrow beams, or jets. Such jets can significantly affect how the galaxy and its surroundings evolve.

In a deep observation that lasted 23 days, scientists used Chandra to create a highly detailed map of both the jets and the intergalactic gas, which they used to track the path of the jets from the black hole. The jet on the left expanded after ricocheting and created a hole in the surrounding cloud of particles that is between 50,000 and 100,000 light years deep and only 26,000 light years wide. For context, the Earth is located about 26,000 light years away from the center of the Milky Way galaxy.

The scientists are working to determine what forms of energy — kinetic energy, heat or radiation — the jet carries. The composition of the jet and the types of energy determine how the jet behaves when it ricochets, such as the size of the hole it creates. Theoretical models of the jet and its interactions with surrounding gas are needed to make conclusions about the jet's properties.

Energy produced by jets from black holes can heat intergalactic gas in galaxy clusters and prevent it from cooling and forming large numbers of stars in a central galaxy like Cygnus A. Thus, studying Cygnus A can tell scientists more about how jets from black holes interact with their surroundings.

These results were presented at the 233rd meeting of the American Astronomical Society meeting in Seattle, WA, in a study led by Amalya Johnson of Columbia University in New York. NASA's Marshall Space Flight Center in Huntsville, Alabama, manages the Chandra program for NASA's Science Mission Directorate in Washington. The Smithsonian Astrophysical Observatory in Cambridge, Massachusetts, controls Chandra's science and flight operations.

More Images
Animation & Video
A Tour of Cygnus A