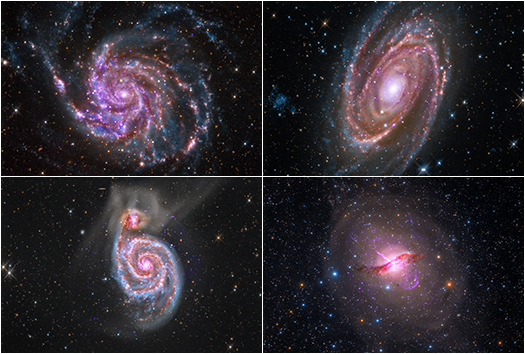 Long before the term "citizen science" was coined, the field of astronomy has benefited from countless men and women who study the sky in their spare time. These amateur astronomers devote hours exploring the cosmos through a variety of telescopes that they acquire, maintain, and improve on their own. Some of these amateur astronomers specialize in capturing what is seen through their telescopes in images and are astrophotographers.

What happens when the work of amateur astronomers and astrophotographers is combined with the data from some of the world's most sophisticated space telescopes? Collaborations between professional and amateur astronomers reveal the possibilities and are intended to raise interest and awareness among the community of the wealth of data publicly available in NASA's various mission archives. This effort is particularly appropriate for this month because April marks Global Astronomy Month, the world's largest global celebration of astronomy.

The images in this quartet of galaxies represent a sample of composites created with X-ray data from NASA's Chandra X-ray Observatory, infrared data from the Spitzer Space Telescope, and optical data collected by an amateur astronomer. In these images, the X-rays from Chandra are shown in purple, infrared emission from Spitzer is red, and the optical data are in red, green, and blue. The two astrophotographers who donated their images for these four images -- Detlef Hartmann and Rolf Olsen -- used their personal telescopes of 17.5 inches and 10 inches in diameter respectively. More details on how these images were made can be found in this blog post.

Starting in the upper left and moving clockwise, the galaxies are M101 (the "Pinwheel Galaxy"), M81, Centaurus A, and M51 (the "Whirlpool Galaxy"). M101 is a spiral galaxy like our Milky Way, but about 70% bigger. It is located about 21 million light years from Earth. M81 is a spiral galaxy about 12 million light years away that is both relatively large in the sky and bright, making it a frequent target for both amateur and professional astronomers. Centaurus A is the fifth brightest galaxy in the sky -- making it an ideal target for amateur astronomers -- and is famous for the dust lane across its middle and a giant jet blasting away from the supermassive black hole at its center. Finally, M51 is another spiral galaxy, about 30 million light years away, that is in the process of merging with a smaller galaxy seen to its upper left.

For many amateur astronomers and astrophotographers, a main goal of their efforts is to observe and share the wonders of the Universe. However, the long exposures of these objects may help to reveal phenomena that may otherwise be missed in the relatively short snapshots taken by major telescopes, which are tightly scheduled and often oversubscribed by professional astronomers. Therefore, projects like this Astro Pro-Am collaboration might prove useful not only for producing spectacular images, but also contributing to the knowledge of what is happening in each of these cosmic vistas.