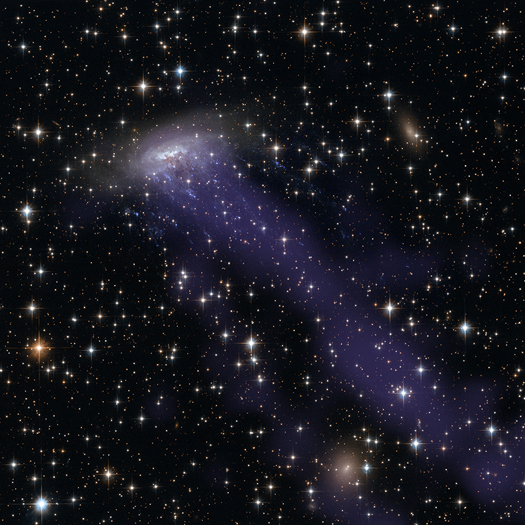 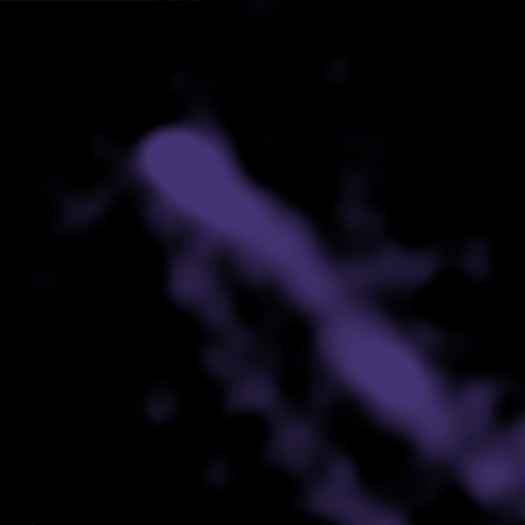 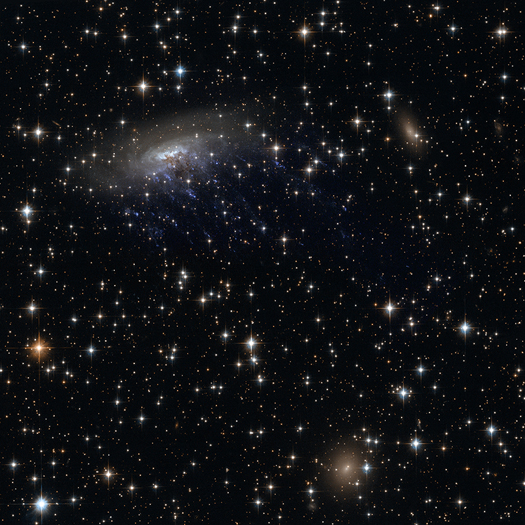 The spiral galaxy ESO 137-001 looks like a dandelion caught in a breeze in this new composite image from the Hubble Space Telescope and the Chandra X-ray Observatory.

The galaxy is zooming toward the upper left of this image, in between other galaxies in the Norma cluster located over 200 million light years away. The road is harsh: intergalactic gas in the Norma cluster is sparse, but so hot at 180 million degrees Fahrenheit that it glows in X-rays detected by Chandra (blue).

The spiral plows through the seething intra-cluster gas so rapidly — at nearly 4.5 million miles per hour — much of its own gas is caught and torn away. Astronomers call this "ram pressure stripping." The galaxy's stars remain intact due to the binding force of their gravity.

Tattered threads of gas, the blue jellyfish-tendrils sported by ESO 137-001 in the image, illustrate the process. Ram pressure has strung this gas away from its home in the spiral galaxy and out over intergalactic space. Once there, these strips of gas have erupted with young, massive stars, which are pumping out light in vivid blues and ultraviolet.

The brown, smoky region near the center of the spiral is being pushed in a similar manner, although in this case it is small dust particles, and not gas, that are being dragged backwards by the intra-cluster medium.

From a star-forming perspective, ESO 137-001 really is spreading its seeds into space like a dandelion in the wind. The stripped gas is now forming stars. However, the galaxy, drained of its own star-forming fuel, will have trouble making stars in the future. Through studying this runaway spiral, and other galaxies like it, astronomers hope to gain a better understanding of how galaxies form stars and evolve over time.

The image is also decorated with hundreds of stars from within the Milky Way. Though not connected in the slightest to ESO 137-001, these stars and the two reddish elliptical galaxies contribute to a vibrant celestial vista.

Why is it leaving matter in its wake? Why isn't the galaxy being held together?

Have any idea of what caused this galaxy to start moving at such a high speed?

Why is it traveling 4.5 MPH relative to it's location?

Simply amazing.. However, I feel bad for the aliens who were living there, I know they probably won't be affected.