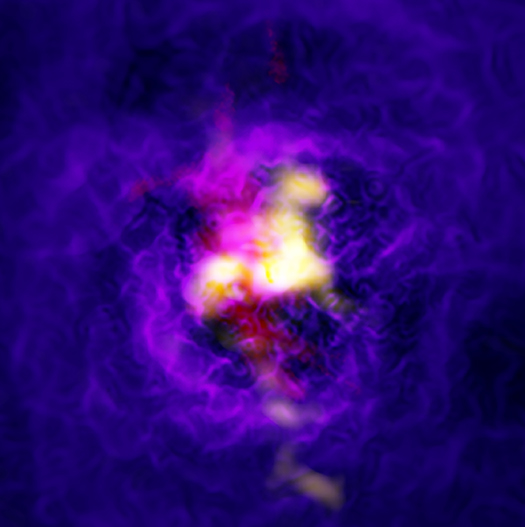 Cold gas falls toward the central black hole, like water entering the pump of a fountain. Some of this infalling gas (seen in the image as ALMA data in yellow) eventually reaches the vicinity of the black hole, where the black hole's gravity causes the gas to swirl around with ever-increasing speeds, and the gas is heated to temperatures of millions of degrees. This swirling motion also creates strong electromagnetic forces that launch high-velocity jets of particles that shoot out of the galaxy.

These jets push away huge amounts of hot gas detected by Chandra (purple) surrounding the black hole, creating enormous cavities that expand away from the center of the cluster. The expanding cavities also lift up clumps of warm and cold gas and carry them away from the black hole, as observed in the MUSE/VLT data (red).

Eventually this gas slows down and the gravitational pull of material in the center of the galaxy causes the gas to rain back in on the black hole, repeating the entire process.

A substantial fraction of the three billion solar masses of gas are pumped out by this fountain and form a filamentary nebula — or cosmic "spray" — that spans the innermost 100,000 light years of the galaxy.

These observations agree with predictions of models describing how matter falling towards black holes can generate powerful jets. Galaxy clusters like Abell 2597, containing thousands of galaxies, hot gas, and dark matter, are some of the largest structures in the entire Universe. Abell 2597 is located about 1.1 billion light years from Earth.

The simultaneous inward and outward flow of gas being driven by a supermassive black hole.
About 1.1 billion light years away.
X-rays from the Chandra X-ray Observatory and optical & radio light from other telescopes.
The image is about 75,000 light years across.
X-rays are purple, radio is yellow, optical is red.
In the constellation Aquarius.
Rate This Image
Rating: 3.8/5
(295 votes cast)
Download & Share
JPEG (229.4 kb)
Large JPEG (1.1 MB)
Tiff (16.5 MB)
Handout (pdf)
Image Feed
More Information
Blog: Abell 2597