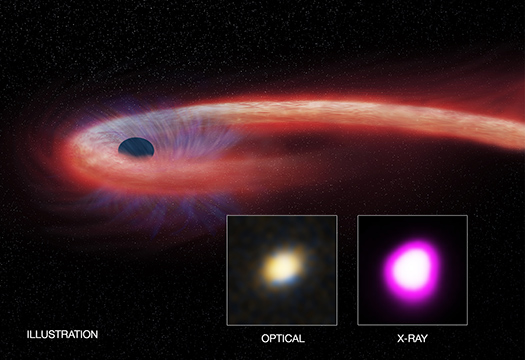 A trio of X-ray observatories has captured a remarkable event in their data: a decade-long binge by a black hole almost two billion light years away. This discovery was made using data from NASA's Chandra X-ray Observatory, Swift Observatory, and ESA's XMM-Newton, as reported in our press release.

This artist's illustration depicts what astronomers call a "tidal disruption event," or TDE. This is when an object, such as a star, wanders too close to a black hole and is destroyed by tidal forces generated from the black hole's intense gravitational forces. During a TDE, some of the stellar debris is flung outward at high speeds, while the rest (shown as the red material in the illustration) becomes hotter as it falls toward the black hole, generating a distinct X-ray flare. A wind blowing away from this infalling material is shown in blue.

Among observed TDEs, this event involved either the most massive star to be completely ripped apart and devoured by a black hole or the first instance where a smaller star was completely ripped apart. The resulting X-ray source is known as XJ1500+154 and is located in a small galaxy about 1.8 billion light years from Earth. The optical image in the left inset shows this galaxy and a cross to mark the location of XJ1500+0154. This image reveals that XJ1500+0154 is found in the center of the galaxy, implying that the source likely originates from a supermassive black hole that resides there. The image on the right shows XJ1500+0154 in the Chandra image covering the same field.

The X-ray data also indicate that radiation from material surrounding this black hole has consistently surpassed the so-called Eddington limit, defined by a balance between the outward pressure of radiation from the hot gas and the inward pull of the gravity of the black hole.

Why can we not see picture instead of illustration in the cosmos?