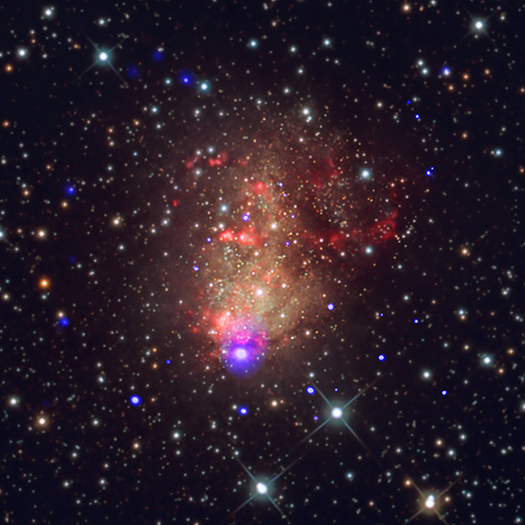 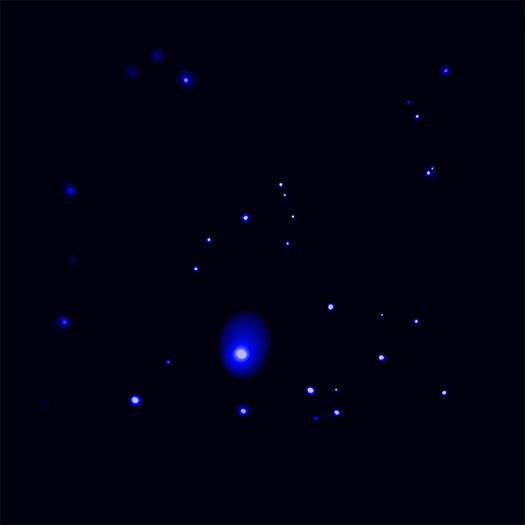 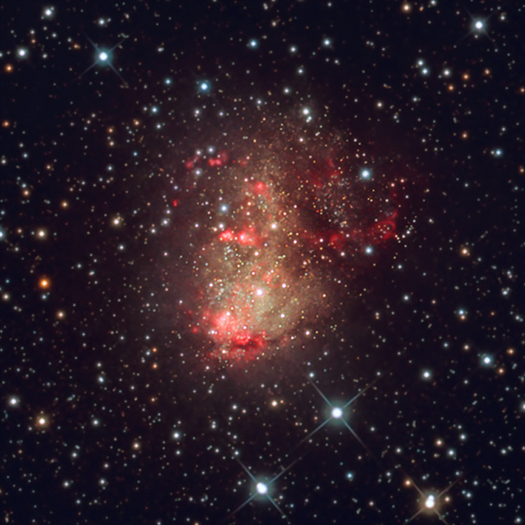 By analyzing Chandra observations of IC 10 spanning a decade, astronomers found over a dozen black holes and neutron stars feeding off gas from young, massive stellar companions. Such double star systems are known as "X-ray binaries" because they emit large amounts of X-ray light. As a massive star orbits around its compact companion, either a black hole or neutron star, material can be pulled away from the giant star to form a disk of material around the compact object. Frictional forces heat the infalling material to millions of degrees, producing a bright X-ray source.

When the massive companion star runs out of fuel, it will undergo a catastrophic collapse that will produce a supernova explosion, and leave behind a black hole or neutron star. The end result is two compact objects: either a pair of black holes, a pair of neutron stars, or a black hole and neutron star. If the separation between the compact objects becomes small enough as time passes, they will produce gravitational waves. Over time, the size of their orbit will shrink until they merge. LIGO has found three examples of black hole pairs merging in this way in the past two years.

Starburst galaxies like IC 10 are excellent places to search for X-ray binaries because they are churning out stars rapidly. Many of these newly born stars will be pairs of young and massive stars. The most massive of the pair will evolve more quickly and leave behind a black hole or a neutron star partnered with the remaining massive star. If the separation of the stars is small enough, an X-ray binary system will be produced.

This new composite image of IC 10 combines X-ray data from Chandra (blue) with an optical image (red, green, blue) taken by amateur astronomer Bill Snyder from the Heavens Mirror Observatory in Sierra Nevada, California. The X-ray sources detected by Chandra appear as a darker blue than the stars detected in optical light.

The young stars in IC 10 appear to be just the right age to give a maximum amount of interaction between the massive stars and their compact companions, producing the most X-ray sources. If the systems were younger, then the massive stars would not have had time to go supernova and produce a neutron star or black hole, or the orbit of the massive star and the compact object would not have had time to shrink enough for mass transfer to begin. If the star system were much older, then both compact objects would probably have already formed. In this case transfer of matter between the compact objects is unlikely, preventing the formation of an X-ray emitting disk.

Chandra detected 110 X-ray sources in IC 10. Of these, over forty are also seen in optical light and 16 of these contain "blue supergiants", which are the type of young, massive, hot stars described earlier. Most of the other sources are X-ray binaries containing less massive stars. Several of the objects show strong variability in their X-ray output, indicative of violent interactions between the compact stars and their companions.

A pair of papers describing these results were published in the February 10th, 2017 issue of The Astrophysical Journal and are available online here and here. The authors of the study are Silas Laycock from the UMass Lowell's Center for Space Science and Technology (UML); Rigel Capallo, a graduate student at UML; Dimitris Christodoulou from UML; Benjamin Williams from the University of Washington in Seattle; Breanna Binder from the California State Polytechnic University in Pomona; and, Andrea Prestwich from the Harvard-Smithsonian Center for Astrophysics in Cambridge, Mass.

More Information
Blog: A Starburst Galaxy with the Prospect of Gravitational Waves