Over 1,000 years ago, ancient observers were treated to the celestial fireworks display of this exploded star without understanding its cause or implications. Astronomers now understand that SN (Supernova) 1006 was caused by a white dwarf star that captured mass from a companion star until the white dwarf became unstable and exploded. Recent observations of the remnant of SN 1006 reveal the release of elements such as iron that were previously locked up inside the star. Because no material falls back into a neutron star or black hole after this type of supernova explosion, the liberation of this star's contents is complete.

From History to High-Energy

When the object we now call SN 1006 first appeared on May 1, 1006 A.D., it was far brighter than Venus and visible during the daytime for weeks. Astronomers in China, Japan, Europe, and the Arab world all documented this spectacular sight. With the advent of the Space Age in the 1960s, scientists were able to launch instruments and detectors above Earth's atmosphere to observe the Universe in wavelengths that are blocked from the ground, including X-rays. SN 1006 was one of the faintest X-ray sources detected by the first generation of X-ray satellites. 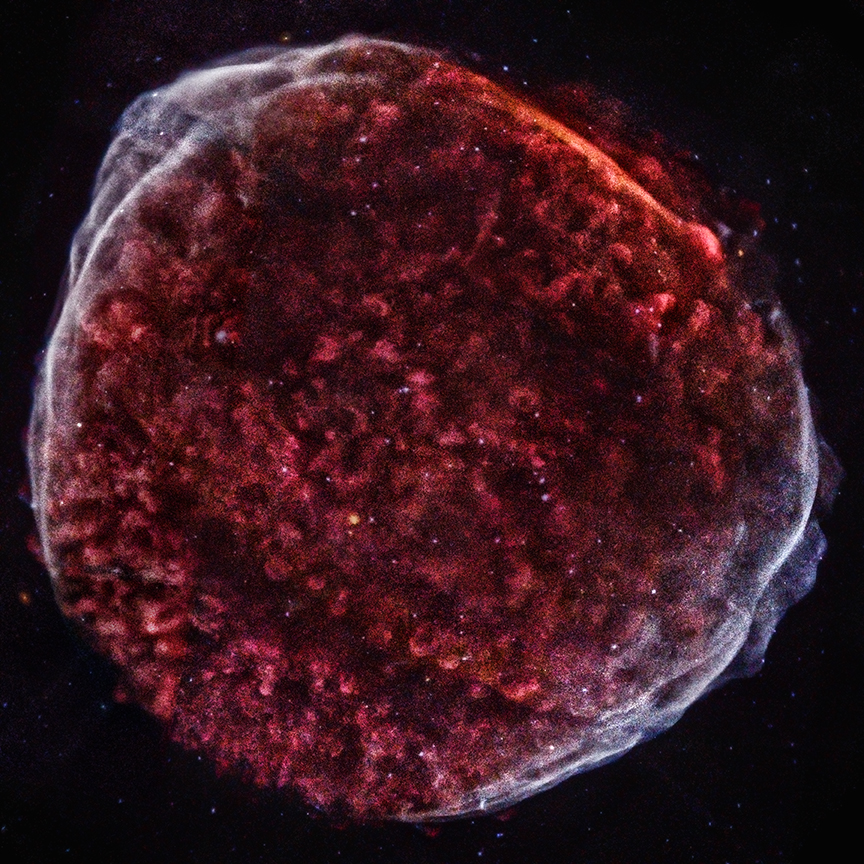 Images of SN 1006 from NASA's Chandra X-ray Observatory reveal this supernova remnant in exquisite detail. By overlapping multiple different pointings of Chandra's field-of-view, astronomers stitched together a cosmic tapestry of the debris field that was created when a small dense star, known as a white dwarf., exploded and sent the remains of the star hurtling into space. In the Chandra image, low, medium, and higher-energy X-rays were colored red, green, and blue respectively. This Chandra image of SN 1006 contains over 8 days’ worth of observing time by the telescope.

The Chandra data provide insight into the nature of SN1006, which is the remnant of a so-called Type Ia supernova. This class of supernova is caused when a white dwarf pulls too much mass from a companion star and triggers a thermonuclear explosion, or when two white dwarfs merge and explode. Understanding Type Ia supernovas is especially important because astronomers use observations of these explosions in distant galaxies as mileposts to mark the expansion of the Universe.

SN 1006 is located about 7,000 light years from Earth. The Chandra SN 1006 image represents the most spatially detailed map yet created of the material ejected during a Type Ia supernova. By examining the different elements in the debris field -- such as silicon, oxygen, and magnesium -- the researchers may be able to piece together how the star looked before it exploded and the order that the layers of the star were ejected, and constrain theoretical models for the explosion. 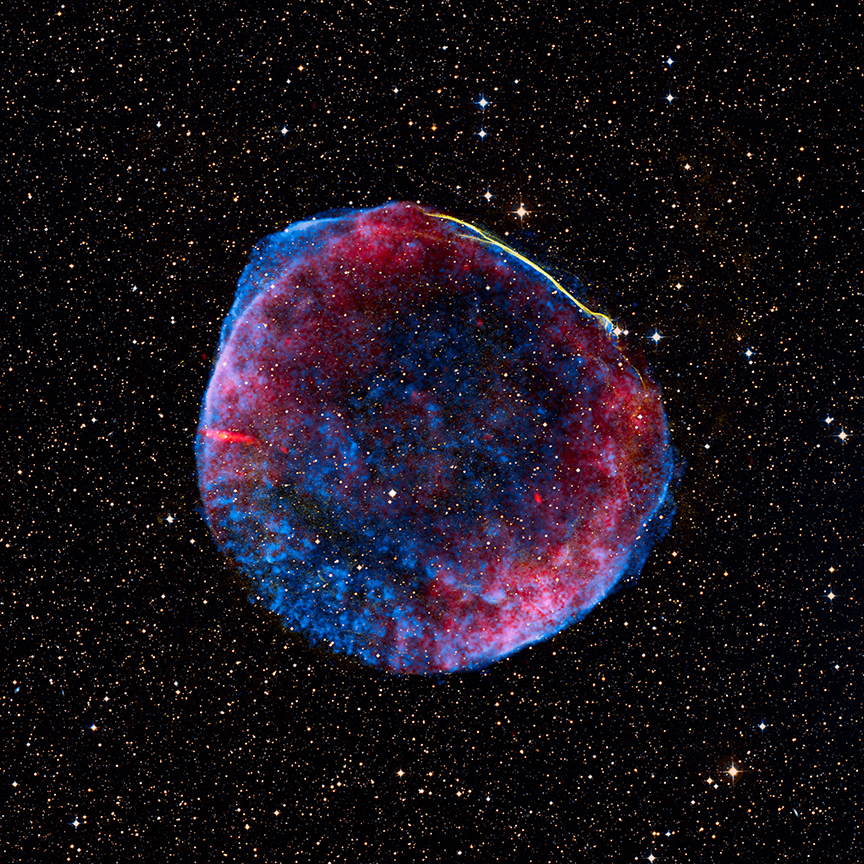 This combined study of the Chandra, CTIO and VLA/GBT observations shows new evidence for the acceleration of charged particles to high energies in supernova shockwaves. An accompanying Hubble Space Telescope image of SN 1006 shows a close-up of the region on the upper right of the supernova remnant. The twisting ribbon of light seen by Hubble reveals where the expanding blast wave is sweeping into very tenuous surrounding gas.

A recent 3D model of the SN 1006 supernova remnant created by constraining mathematical models of the object with X-ray observational data from Chandra helps explore how the clumping of material after the explosion and the acceleration of high-energy particles affects the structure of the remnant. A ball of fiery-looking stellar debris and heavy elements has been shot into the interstellar medium with speeds of tens of thousands of miles per hour. The material is heated up to temperatures of tens of millions of degrees that Chandra observes in X-ray light. This model is the work of Salvatore Orlando (National Institute for Astrophysics (INAF), Osservatorio Astronomico di Palermo) and his colleagues. 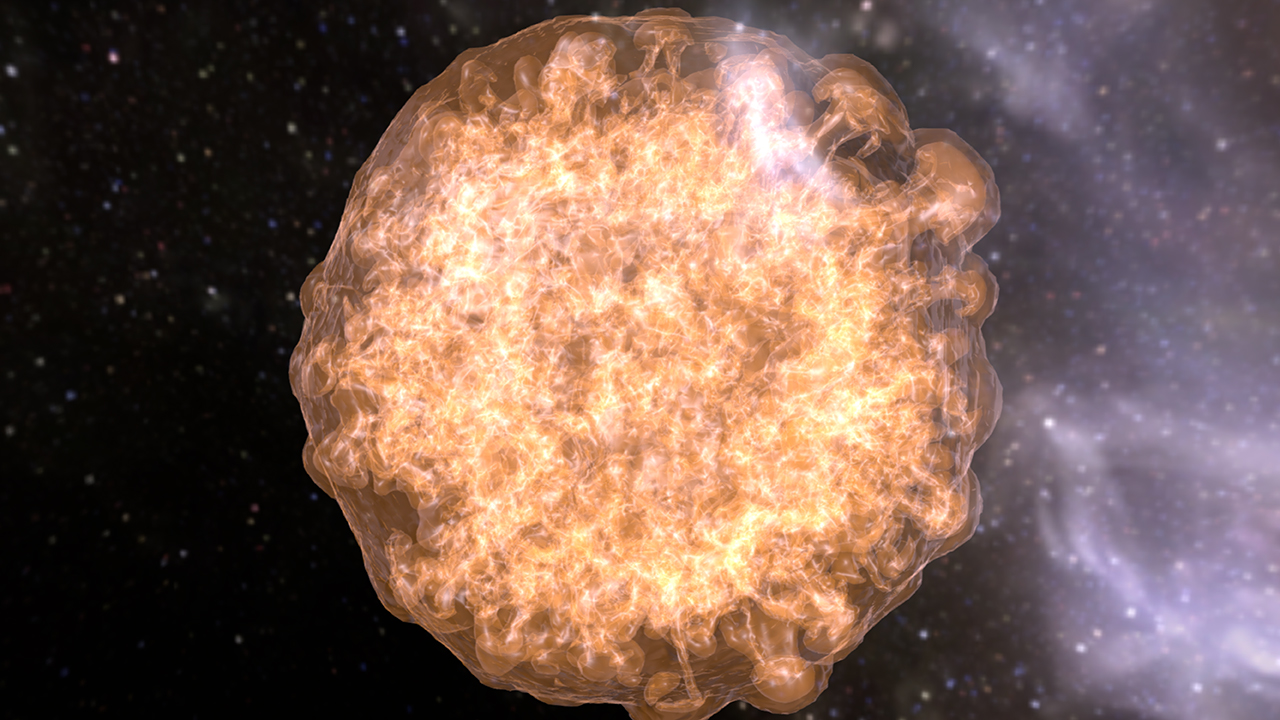 Select the 3D printer of your choice to make your own SN 1006. Download the files below. For our 3D-printed example shown here, one color of PLA filament was used for each piece. Support structures were required, and removed after printing by using a dissolvable substrate with minimal hand-cleaning required.