In 1572, Danish astronomer Tycho Brahe was among those who noticed a new bright object in the constellation Cassiopeia. Adding fuel to the intellectual fire that Copernicus started, Tycho showed this "new star" was far beyond the Moon, and that it was possible for the Universe beyond the Sun and planets to change.

Astronomers now know that Tycho's new star was not new at all. Rather it signaled the death of a star in a supernova, an explosion so bright that it can outshine the light from an entire galaxy. This particular supernova was a Type Ia, which occurs when a white dwarf star pulls material from, or merges with, a nearby companion star until a violent explosion is triggered. The white dwarf star is obliterated, sending its debris hurtling into space (see illustration below)

More than four centuries after Brahe’s discovery, astronomers using Chandra have found that the supersonic expansion (millions of miles per hour) of the stellar debris has actually created two X-ray emitting shock waves: one moving outward into the interstellar gas, and another moving back into the debris. These shock waves produce sudden, large changes in pressure and temperature. Researchers have also found evidence in the Chandra data that a cosmic event like Tycho’s supernova can accelerate particles to energies times higher than achieved by the most powerful particle accelerator on Earth.

In addition, Chandra data have revealed an intriguing pattern of bright clumps and fainter areas in Tycho. What caused this thicket of knots in the aftermath of this explosion? By comparing these X-rays from Chandra with computer simulated images, scientists found that the Tycho supernova remnant strongly resembles a scenario in which the clumps came from the explosion itself. While scientists are not sure how, one possibility is that star's explosion had multiple ignition points, like dynamite sticks being set off simultaneously in different locations.

Understanding the details of how stars like those that created Tycho explode is important because it may improve the reliability of the use of Type Ia supernovas as "standard candles" — that is, objects with known inherent brightness, which scientists can use to determine their distance. This is very important for studying the expansion of the universe. Supernovas like Tycho also sprinkle elements such as iron and silicon, that are essential for life as we know it, into the next generation of stars and planets.

Researchers have constructed 3D computer models of a Type Ia supernova remnant as it changes with time. Their work shows that there needed to be some asymmetry in the simulated supernova explosion in order for the model of the ensuing supernova remnant to closely resembles the Chandra image of Tycho at a similar age. This led astronomers to conclude that the star that exploded to create the Tycho remnant must also have had an uneven blast to produce the spectacular stellar debris field seen today. 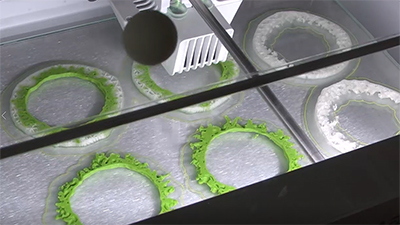 A team of astronomers, led by Gilles Ferrand of RIKEN in Saitama, Japan, constructed 3D computer models of a Type Ia supernova remnant as it changes with time. Their work shows that initial asymmetries in the supernova explosion are required for the model of the supernova remnant, at an age of 500 years, to closely resemble the Chandra image of Tycho. This conclusion is similar to that made by Toshiki Sato and his team. These 3D printable files were created by the Chandra team from Ferrand, et al's model. The stellar ejecta are green (inside material), while the interstellar medium (ISM) swept-up by the blast wave is white/clear (or purple in the single image).

This model consists of two similar halves, with two parts to each half (the ejecta, and the outer shockwave). If a 2-color printer is available, the two parts can be combined like so: 3MF file 1, 3MF file 2 OR WRL file 1, WRL file 2, WRL file 3. (Note: In our printing tests, these models did not need any support structures as the angle is gradual enough to build up onto itself.)