Eta Carinae is a star system that contains the most luminous star known in our Galaxy. It radiates energy at a rate that is 5 million times that of the Sun. Observations indicate that Eta Carinae is likely a double star system where matter is rapidly boiling off one star's surface.

Some astronomers think that the massive star could explode as a supernova as soon as in the next few decades, or perhaps not for another few million years. Whenever this gigantic explosion happens, it would pose no threat to life here on Earth at a distance of about 7,500 light years away, but it would be quite a show. 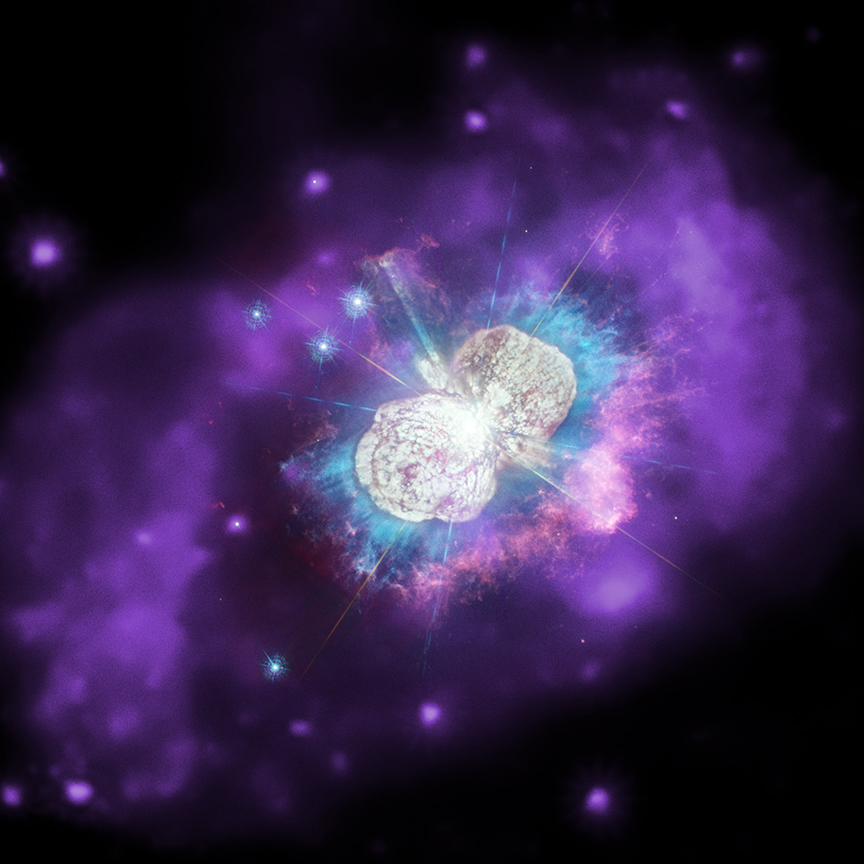 Between 1837 and 1856 it increased dramatically in intensity to become the brightest star in the sky except for Sirius, despite being eight hundred times farther away than that star. Astronomers think this "Great Eruption," as this 19th-century event is called, was caused by internal radiation pressure in the massive star that somehow triggered an instability, or by interaction with its nearby companion star. After the Great Eruption, Eta Carinae faded to become a relatively dim star that could only be seen through a telescope. Since 1940, it has begun to brighten again, becoming visible to the unaided eye.

Modern day observations of Eta Carinae have shown that it is, in fact, a double-star system. The smaller companion is not directly visible in images from even today's most powerful telescopes, but variability in X-rays in the regions close to the star signals the companion star's presence. Astronomers don't know exactly what role the companion has played in the evolution of Eta Carinae, or what it will do in the future.

Eta Carinae may be an extreme example of a "luminous blue variable" — a critical stage in the evolution of the most massive stars. These gigantic stars can produce intense amounts of radiation that causes violent instabilities before it explodes as a supernova, or even possibly a "hypernova," a type of super-supernova explosion that has been hypothesized to produce gamma-ray bursts.

Images taken in different wavelengths of light reveal different structures, each providing more information about the outbursts of Eta Carinae.

X-rays of Eta Carinae from NASA’s Chandra X-ray Observatory give an important glimpse deep into the nebula where the fastest material is being thrown off by Eta Carinae. The outer, horseshoe-shaped ring, which is about two light years in diameter, provides evidence of another large explosion that occurred over a thousand years ago. Chandra's X-ray image reveals a hot inner core about eight times smaller than the outer ring and a hot central source less than a light month in diameter that may contain this mysterious superstar.

Optical data of Eta Carinae taken by NASA's Hubble Space Telescope reveal two spectacular bubbles of gas expanding in opposite directions away from a central bright region at speeds in excess of a million miles per hour. The inner region visible in the Chandra image appears to be associated with a central disk of high velocity gas rushing out at much higher speeds perpendicular to the bipolar nebula visible in the optical image.

Infrared images, such as those from 2MASS (above, right) or NASA's Spitzer Space Telescope (below, depicting a larger field of view), show the surrounding nebula, letting us peer through the dust that obscures our view in visible light to reveal the intricate details and extent of the Carina Nebula around this brilliant star.

For this 3D visualization, astronomers and artists used NASA observations to model both the close-up and wide views of this massive and eruptive star. Hubble and Chandra observed the nested layers of gas and dust around Eta Carinae using visible, ultraviolet, and X-ray light, as well as in the hydrogen alpha emission line. Spitzer provides the larger view of the Carina Nebula, along with Eta Carinae's dominant position within this star-forming region.

This 3D visualization is presented by the AstroViz Project of NASA's Universe of Learning. Viewers can gain appreciation for how the observations from two centuries ago connect to the resulting structures seen today. Full 360-degree 3D views help to assemble a complete mental model that aids interpretation of the NASA observations. A sonification and a 3D printable model of this data set were also made available. Eta Carinae serves as a notable example of the outbursts in the dying stages of massive stars.

Astronomy
Make the Most of Your Universe