Never give up and trust your intuition

We are very pleased to welcome a guest blogger, Julie Hlavacek-Larrondo, who led the work described in our latest press release. Julie was raised in Montreal, Canada, and in 2007 completed a Bachelor’s degree in physics at the University of Montreal. Julie then obtained a Master’s degree in astrophysics. In 2012, she completed a PhD at the University of Cambridge. She is currently an Einstein Fellow at Stanford University.

It was during my Master degree at the University of Montreal that I realized just how fascinating black holes are. 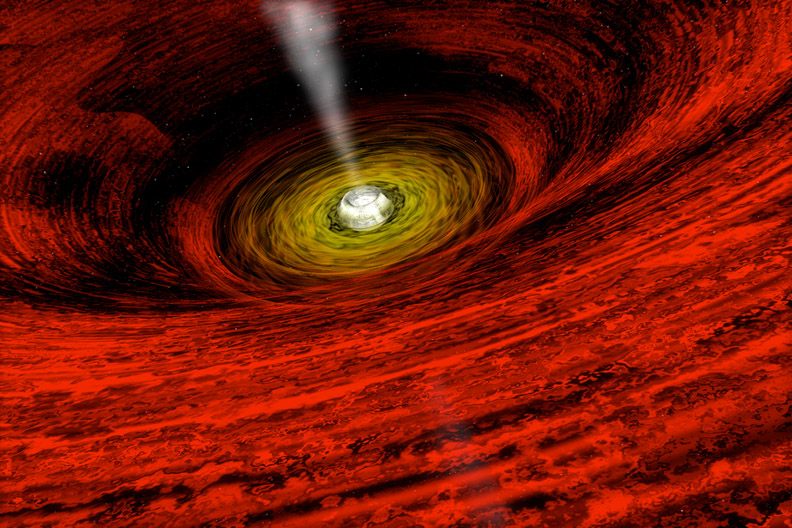 I remember stumbling upon a press release from Chandra in 2007. The Chandra space telescope revealed an image of a jet, powered by a supermassive black hole, blasting through its neighboring galaxy. What's so fascinating? Supermassive black holes are tiny objects, about a billion times smaller than the galaxy it resides in, yet, it can create jets that extend well beyond the size of the galaxy! How can something so small be so powerful?

One of the main accomplishments of my PhD was to study the properties of these jetted outflows in clusters located very far way (the farther we look into space, the further back in time we look). What surprised me, was that we could see the same outflows in distant clusters as in nearby ones. This meant that these black holes had been powering extreme outflows for a long time, over 5 billion years (about 40% of the age of the Universe!). I also remembered, from earlier work that Andy and I published, that these black holes were very rarely "shining". To power the jets, black holes must accrete mass. As the mass falls towards the black hole, it heats up, shines brightly, and when it crosses the black hole's event horizon, the point of no return for all matter and light, it gets accreted onto the black hole. To explain the lack of "shininess" of our objects, we proposed that the black holes were significantly more massive than previously thought. This way, they could power the outflows without shining so much.

This is when I started thinking about the masses of these monster black holes (and this is where it really gets interesting!). I knew that the most accurate way of determining the mass is to model the rotation of the gas or stars near the black hole. This requires very high-resolution observations, which can only be done with the Hubble Space Telescope for our objects. But none of our objects yet had Hubble data. So I started thinking, is there another way of constraining the mass of these black holes?

This is when I thought about the fundamental plane of black hole activity (or at least, my intuition told me this was the key to our problem). I remember reading about this remarkable plane: a simple relation between the amount of X-ray and radio waves a black hole emits, and its mass. All black holes that are "shining poorly" follow this correlation. A quasar for example, which consists of a supermassive black hole accreting a lot of mass, "shines very brightly" and does not follow the plane. Thankfully, we knew that our black holes did not "shine brightly", so they ought to follow the plane!

The exquisite spatial resolution of Chandra allowed me to precisely determine the X-ray emission of our objects. The only other ingredient I needed was the radio emission, which was provided by Dr. Alastair Edge from Durham University and his graduate student, Michael T. Hogan. Then, I estimated the mass of our objects using the standard relations between the mass of black holes and the properties of their host galaxies (black hole mass correlates with the bulge luminosity of the galaxy, for example). Finally, I plotted our objects on the fundamental plane of black hole activity.

I remember showing this plot to Andy Fabian, and he was really excited about the result. It had two groundbreaking (well universebreaking) consequences: 1) that the black holes at the centers of some clusters are extremely massive, easily exceeding 10 billion times the mass of the sun; and 2) the standard relations between black hole mass and host galaxy properties are no longer "standard". The latter is very important, because it means we don't really understand how these black holes and their host galaxy coexist. 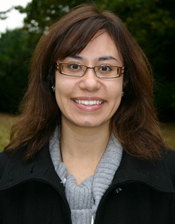 Aim for the future: measure the mass of these extreme black holes directly. To do this, I will need the superior spatial resolution of Hubble. For some of our objects, I only have lower limits of the mass, which means that the black hole mass could be even higher. I wouldn't be surprised if I end up finding a 100 billion solar mass black hole (the biggest black hole yet discovered is around 30 billion times the mass of the sun)!

Thrilling discoveries such as these, the theoretical challenges in modern science, and the sheer beauty of astrophysics, are what makes me so passionate about this field of research. As a child, I was always the adventurous kind and eager to learn. What I've learnt through this study, and especially through my doctorate in general, is to work hard, never give up and trust your intuition. If you have an idea, test it. You never know what you might find. It could turn out to be nothing, but you might also make an unexpected and truly fascinating discovery.

Category:
Black Holes
Groups & Clusters of Galaxies
Disclaimer: This service is provided as a free forum for registered users. Users' comments do not reflect the views of the Chandra X-ray Center and the Harvard-Smithsonian Center for Astrophysics.
Please note this is a moderated blog. No pornography, spam, profanity or discriminatory remarks are allowed. No personal attacks are allowed. Users should stay on topic to keep it relevant for the readers.
Read the privacy statement