Continuing our interest in poetry, here is a poem inspired by Chandra's image from August 11th 2011 of VV340 , in which two colliding galaxies look like a 'Cosmic Exclamation Point.' The author was fascinated by the image and the metaphor used to encapsulate it – by, that is, the whole notion of 'cosmic punctuation' – so he decided to explore these ideas further in a poem. The poem was first published in Connotation Press: An Online Artifact. Jonathan Taylor is author of the novel Entertaining Strangers (Salt, 2012) and the memoir Take Me Home (Granta, 2007). He is Senior Lecturer in Creative Writing at De Montfort University in the U.K.

You can read two other poems from Jonathan about Chandra’s discoveries in previous blog posts:
The Poetry of Discovery
History Lesson 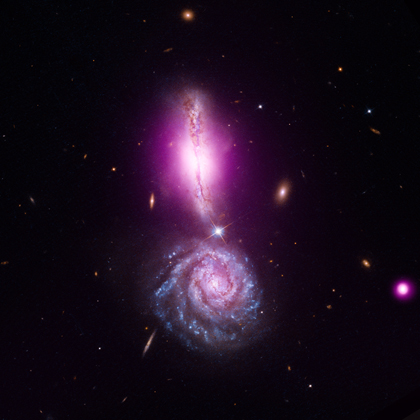 In the beginning was the Word, and the Word was with God.
(John, 1)

and a typo-cosmographist might deciper
the universe as a Word under erasure,
a daring act
of apocalyptic swearing.