The Poetry of Discovery

Richard Dawkins, the Oxford zoologist and author, once said that "science is the poetry of reality", an observation that inspired a new video from the people who run the Symphony of Science project.

Another link can be made between science and poetry when scientific discoveries inspire people to write poems. Jonathan Taylor, a Senior Lecturer in Creative Writing at De Montfort University in the UK, wrote a poem about the deep note generated by a black hole in the Perseus galaxy cluster.

Jonathan is not only a poet, but a memoirist and novelist. 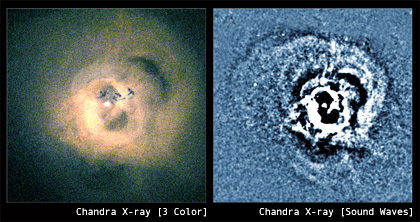 "I first came across the fascinating idea that the supermassive black hole emitted a B-flat on a T.V. programme, and it instantly caught my imagination. I've always written a great deal about both music and science, and here I had the opportunity to combine both interests in one poem. There's real beauty, music and poetry in contemporary cosmology, yet it's a subject that's often overlooked by writers." - Jonathan Taylor

For 2.5 billion years you've moaned
for no one, because no one
could hear you from Perseus Cluster,
250 million light years away,
your galactic ground-bass a million billion
times lower than human hearing,
dog hearing, even Keplerian hearing,

who would have been hard pushed
to retain an equal temperament
in the face of such monotony —
more monkish medieval drone
than planetary polyphony,

as if Palestrina never happened,
and Bach dozed off at the organ
shortly after the Big Bang,
his elbow resting on a pedal point
over which he dreamt his flickering fugues,
short-lived as novas,
short-lived as life,
short-lived as anything but you,
and all-too-soon
sucked back down
into your B-flat abyss.