A Long Look Back at History

Fifty years ago this week, on October 1st, the legislation creating the National Aeronautics and Space Administration, or NASA, was enacted. There will likely be a lot of buzz about this anniversary, and rightly so, since it has, among many other things, shaped our understanding of the Universe so dramatically.

1962: A team of scientists under the direction of Riccardo Giacconi at American Science and Engineering in Cambridge, MA, used a small X-ray detector aboard an Aerobee rocket to discover Scorpius X-1, the first source of X-rays outside our solar system.

1963-1970: A number of rocket and balloon flights were launched by various agencies and countries during these years. Some of the highlights included: the first X-ray pictures of the Sun, the discovery of 40 X-ray sources other than the Sun including the Crab Nebula pulsar, supernova remnants, and the galaxy M87.

1970-1973: NASAâ€™s Uhuru X-ray satellite mission. Uhuru, the first satellite dedicated to the observation of cosmic X-ray sources, was equipped with a sensitive proportional counter attached to a viewing pipe to locate the sources. It expanded the number of known sources to more than 400, showed that X-ray stars are neutron stars or black holes accreting matter from companions in binary star systems, and discovered X-rays from hot gas in galaxy clusters.

1978-1981: NASAâ€™s Einstein X-ray Observatory. This was the first large X-ray telescope with mirrors. Einstein made the first X-ray images of shock waves in supernova remnants, and hot gas in galaxies and clusters of galaxies. Einstein also located accurately over 7,000 X-ray sources, including stellar coronas, X-ray binaries, galaxies and quasars. It also provided a new way to study dark matter and showed that most of the X-ray background is probably due to individual sources.

1990-1999: ROSAT. The full name of this observatory is Roentgensatellite, a German reference to Willem Roentgen who first discovered X-rays. ROSAT, a German mission, expanded the number of known X-ray sources to 125,000, investigated the multi-million-degree gas present in the upper atmospheres of many stars, and made the first detection of radiation from the hot surface of a neutron star. It resolved 70% of the soft, or lower-energy, X-ray background, and made an extensive catalogue of galaxy clusters.

1993-2000: Advanced Satellite for Cosmology and Astrophysics, or ASCA. This Japanese satellite had low-resolution mirrors and the first large CCD detectors. It was especially designed to study the detailed spectra of X-ray sources in supernova remnants, active galactic nuclei and galaxy clusters.

1995-present: Rossi X-ray Timing Explorer (RXTE). NASAâ€™s RXTE can study rapid time variability in the emission of cosmic X-ray sources over a wide band of X-ray energies. This has made it very valuable for understanding the behavior of matter near neutron stars and black holes and it also found possible evidence for the dragging of space by strong gravity in the vicinity of black holes.

1996-2002: BeppoSAX. A product of Italy and the Netherlands, BeppoSAX has proved to be especially useful for wide band spectra of active galactic nuclei, and for studying gamma-ray bursts by determining their positions with an unprecedented precision and monitoring their X-ray afterglow. 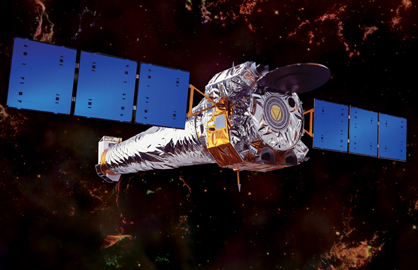 1999-present: Chandra. Well, if you have been reading this blog regularly, you know what Chandra can do and what it has been doing since it was launched into orbit in July 1999. For as much information on Chandra as you can handle, visit the main page of our website at http://chandra.harvard.edu.

1999-present: XMM-Newton. This mission from the European Space Agency, launched about five months after Chandra, is quite complementary to the capabilities of NASAâ€™s flagship for X-ray astronomy. With its large collecting area, spectrometers and moderate resolution, XMM-Newton is especially designed to make detailed studies of the spectra of supernova remnants, accretion disks around black holes, stars and other types of sources.

2003-present: Swift. This NASA satelliteâ€™s full name is the â€œSwift Gamma-Ray Observatoryâ€ but it also carries an X-ray telescope. As its name implies, Swift is able to rapidly slew across the sky to capture fleeting cosmic events.

Again, this list is just an introduction to the history of this relatively recent field of X-ray astronomy. Remember, there have been other missions, other events, and certainly lists and lists of people too numerous to cite here.

So, happy anniversary NASA! Letâ€™s hope the next few decades together with X-ray astrophysics will be as exciting as the last.

-Megan Watzke, CXC
(This entry was based largely on a Chandra Chronicles article written in 2002)