A Hero of the Heroic Age of Astronomy 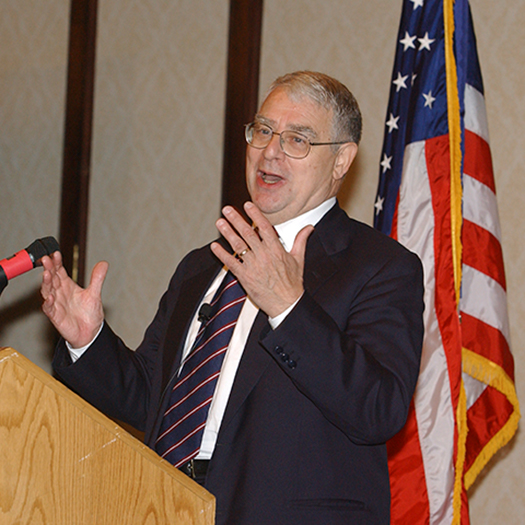 Riccardo Giacconi speaking at a Chandra Symposium in 2003. Credit: NASA/MSFC

Riccardo Giacconi, the "Father of X-ray Astronomy," Nobel prize-winner, and one of the most influential figures of modern astrophysics, has died at the age of 87.

Giacconi was born in Genoa Italy on October 6, 1931. He spent most of his life until 1956 in Milan, where he obtained a Ph.D. in physics from the University of Milan, working under the direction of noted cosmic ray physicist Giuseppe Ochialini. Giacconi subsequently worked as an assistant professor at the University of Milan before emigrating to the United States to work for R.W. Thompson as a Fulbright Fellow at Indiana University.

From Indiana he moved to Princeton where he met and worked with Herbert Gursky, also a post-doctoral fellow. According to Giacconi, "We built equipment, worked like fiends, analyzed data, and declared failure." When his Fulbright fellowship expired, Giacconi moved to American Science and Engineering (AS&E) in Cambridge, MA, a startup formed by Martin Annis, an ex-student of Bruno Rossi of the Massachusetts Institute of Technology (MIT). At that time AS&E was primarily involved in military space research. 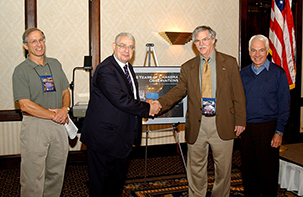 At a party at his home, Rossi suggested that Giacconi look into the possibility of developing a program in X-ray astronomy. At that time, a group led by Herbert Friedman of the Naval Research Laboratory had observed X-rays from the Sun, but based on the strength of the solar X-rays, it seemed unlikely that X-rays could be detected from the much more distant stars.

In the years from 1959-1962, Giacconi developed his legendary expertise in space research, producing more than 30 rocket and satellite payloads. One of these was the historic rocket flight of June 12, 1962. In the 350 seconds it spent above the atmosphere, this rocket payload detected the first cosmic X-ray source outside our Solar System, Scorpius X-1, as well as an all-pervasive X-ray background radiation.

This discovery opened up a new window for the exploration of the universe. Giacconi was ready to use this new portal. In 1963, Giacconi and Gursky, who had moved from Princeton to join Giacconi at AS&E, led an effort to lay out a bold program for the future of X-ray astronomy that included more rocket flights, an X-ray satellite to survey the entire sky, and within a few years, an X-ray telescope.

The schedule was overly ambitious, but the vision was spot-on, and the results astounding. With funding from NASA, Giacconi's group developed and operated the first X-ray satellite, Uhuru, in 1970, which led to the discovery of black holes. In 1973 Giacconi's group moved to the Harvard-Smithsonian Center for Astrophysics (CfA) in Cambridge, Mass. There they developed and launched the Einstein X-ray Observatory, the first imaging X-ray telescope, in 1978. Einstein demonstrated beyond doubt the importance of X-ray imaging, finding that essentially all types of astronomical objects and systems emitted X-rays. One byproduct of this mission was the development of procedures and techniques to plan, schedule and archive the observations made by Einstein, thus making the observatory accessible to the entire astronomical community. This model of open access, new at the time, has now been adopted by all NASA observatories.

In 1976, together with Harvey Tananbaum, Giacconi proposed Einstein's successor, NASA's Chandra X-ray Observatory, which was launched in 1999. Chandra, now in its 20th year of operation, remains without peer for its ability to produce sub-arcsecond X-ray images, and has established itself as one of the most productive observatories ever. More than 7,000 refereed papers have been published using Chandra data on topics ranging from the atmospheres of exoplanets, to neutron stars and black holes, to clusters of galaxies, and to dark matter and dark energy. 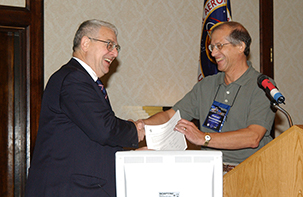 Giacconi moved from the CfA to the Space Telescope Science Institute (STScI) in Baltimore, MD in 1981 to become the first permanent director of STScI. As director, he carried over and expanded many of the procedures developed for the Einstein observatory, and played a critical leadership role in the development of corrective optics for the Hubble Space Telescope.

In 1993, Giacconi moved to Garching, Germany, where he served as Director General of the European Southern Observatory (ESO) for 7 years. At that time ESO's Very Large Telescope was under construction, and he instituted management techniques that were important for its successful development and operation. In 1999 Giacconi moved back to the United States to become president of the Associated Universities, Inc., where he worked on the Atacama Large Millimeter Array (ALMA), and instituted some of the same operational principles.

In 2002, Giacconi was a co-recipient of the Nobel Prize in physics for "pioneering contributions to astrophysics, which have led to the discovery of cosmic X-ray sources."

In his extraordinary career Giacconi thus "hit for the cycle," to use a baseball term, directing premier observatories in wavelength bands ranging from X-rays through radio. In his autobiography, he summed it up this way:

"I am grateful to live in this heroic era of astronomy and to have been able to participate and contribute to its evolution."

We are grateful that he did, too.

Giacconi is survived by his wife, Mirella, daughters Anna and Guia, and grandchildren Alexandra and Colburn. He was predeceased by his son Marc.

This article was written by Wallace Tucker, an astrophysicist who co-authored the book, The X-ray Universe, with Riccardo Giacconi and worked with him beginning in the 1960s on X-ray astronomy missions such as Uhuru, Einstein, and what would ultimately become Chandra.

In response to the passing of Riccardo Giacconi on December 9, 2018, scientists around the world emailed Harvey Tananbaum to share their immediate thoughts. While these comments were not originally intended for the public, each person has graciously agreed to let us post their thoughts with the Chandra community and the public.

Ken Pounds: University of Leicester
"How sad to hear of the loss of a remarkable colleague and friend. One more reason for not going to X-RAY meetings any more."

Neta Bahcall: University of Leicester
"A remarkable person, outstanding scientist, exceptional leader, and a good friend. He will be sorely missed by all."

Gianni Zamorani and Monica Tosi: National Institute of Astrophysics, Italy
"Independently of the age, we perceived him as immortal, always ready for a new and more challenging adventure. With his inspiring views of the future, he was always miles ahead of everybody else. Riccardo will remain a reference point for all of us, and we will miss him a lot.

Claude Canizares: Massachusetts Institute of Technology
"Very, very sad indeed. How lucky we were to have known him. He will never be forgotten."

George Clark: Massachusetts Institute of Technology
"Sad news for the world of astronomy, and especially for those of us who knew him so well and had the privilege and fun of working with him. I remember well those early days at AS&E where his creativity, energy, friendship, and leadership gave birth to extrasolar x-ray astronomy."

Mark Bautz: Massachusetts Institute of Technology
"For my part, it was a great privilege to have worked to realize just a part of his vision."

Edward van den Heuvel: University of Amsterdam
"I just heard about the passing away of Riccardo Giacconi, the giant that shaped the field of X-ray astronomy, and with that shaped our lives and careers."

Josh Grindlay: Center for Astrophysics | Harvard and Smithsonian
"As a recently hired Asst. Prof., I had the honor of co-teaching our HEA graduate course with Riccardo. His leadership was legendary."