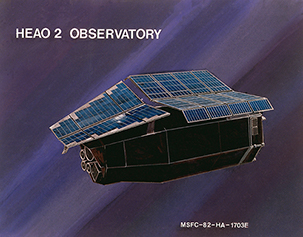 On November 13, 1978, the High Energy Astrophysical Observatory 2 (HEAO-2) blasted into space from Cape Canaveral, Florida. Renamed the Einstein Observatory after it was successfully placed into orbit, this was the first fully imaging telescope dedicated to looking at X-rays beyond the Sun.

The Einstein Observatory and the Smithsonian Astrophysical Observatory (SAO), part of the Harvard-Smithsonian Center for Astrophysics in Cambridge, Mass., are forever linked. The telescope was conceived, proposed to NASA, run by, and its data processed by SAO. The original conception for Einstein came from a group at the American Science & Engineering company, led by Nobel Prize-winner Riccardo Giacconi, which moved to SAO in 1973. SAO’s Leon van Speybroeck, who would later become the Telescope Scientist for Chandra, designed the telescope for Einstein.

In addition to being the first X-ray telescope capable of making images, Einstein was an extremely important mission for other reasons. For example, the Einstein Observatory set aside about a quarter of its observing time for a “Guest Observer” program. SAO’s Fred Seward headed the Guest Observer program and ensured an open, competitive process that enabled scientists who were not part of the original consortium to propose observations and to analyze Einstein data.

“I believe the that the most important result from Einstein was demonstrating that almost all types of astronomical objects, ranging from stars to distant quasars, emit X-rays,” said SAO’s Harvey Tananbaum, the program manager and then principal investigator for Einstein before becoming the Director for the Chandra X-ray Observatory.

SAO was responsible for the processing and distribution of the data from Einstein to the scientific community. Bill Forman and Christine Jones led a team that examined the “quick look” data from the telescope, analyzing it to make sure the observations were correctly carried out.

“There is a lot of hard work by a team of people behind each beautiful image and scientific result [from Einstein],” said Jones and Forman in a joint statement.

Pepi Fabbiano, who held several positions with Einstein and became the project scientist, describes Einstein’s angular resolution as “revolutionary.” She said that Einstein showed “the complexity of the X-ray universe and the need for high-resolution X-ray imaging.” (Digitized versions of Einstein’s images can be found at the link for “Einstein Slide Collection” at https://www.cfa.harvard.edu/about/history/einstein/index.html).

The Einstein Observatory led to many exciting and significant discoveries from stars to galaxies to galaxy clusters and many things in between. It also demonstrated to the world the potential for the field of X-ray astronomy, which would take the next step with the launch of the Chandra X-ray Observatory in 1999. As we approach Chandra’s 20th anniversary of operations in space next year, it’s appropriate to look back and celebrate all of the milestones of this exciting and evolving field. Happy 40th birthday, Einstein Observatory!

(More information about the Einstein Observatory and this era in X-ray astrophysics can be found in two books by Wallace Tucker: “Star Splitters and High Energy Astronomy” and “The X-ray Universe,” which he co-authored with Riccardo Giacconi.)