Skeletons and Spacecraft: An X-ray Halloween 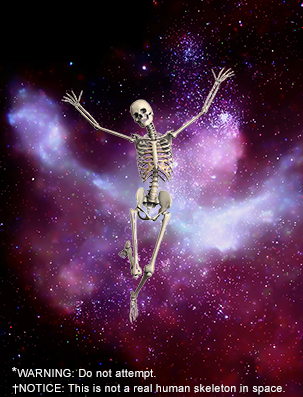 It’s that excellent time of year again when skeletons become all the rage. With Halloween just around the corner, the good folks at the Oregon Zoo released a series of X-ray images that show the fascinating — and a little bit spooky — skeletons of some of their animals.

Those of us who work for NASA’s Chandra X-ray Observatory share an affinity for X-ray images. After all, we’ve been in the business of collecting X-rays from space for nearly 20 years. During that time, we’ve observed X-rays coming from material falling into black holes, the remains of exploded stars, galaxies, and much, much more.

What’s the connection between X-rays from a doctor’s (or vet’s office) and those of a space-based telescope? A medical X-ray machine consists of two parts: an X-ray source at one end, and a camera at the other. The body or body part is placed in between. When the X-rays from the source shine, the camera records the X-rays that reach the photographic film or detector.

In space, things are a little more complicated. The cosmic object (such as a galaxy, or matter near a black hole) acts like the source in the doctor's machine, emitting X-rays on its own. On the other end, Chandra collects and records the X-rays shining into it — like the film or detector on the X-ray machine. A Chandra X-ray image of, say, a galaxy gives an idea of how the galaxy is emitting X-rays, just like a photograph of the galaxy at visible wavelengths gives an idea of how the galaxy is emitting visible light, that is, the kind humans can detect with their eyes. 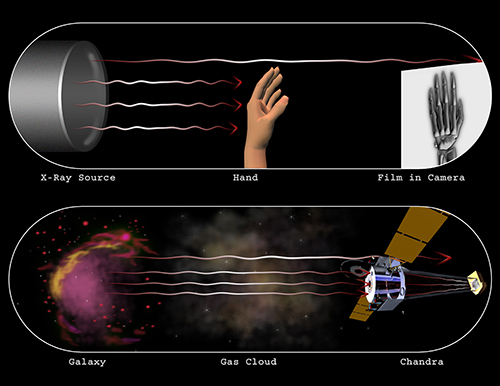 Even though there are differences between a medical X-ray and X-rays that come from space, there is one important commonality: X-rays! First discovered by German physicist Wilhelm Rontgen in 1895, X-rays are a high-energy form of light that can pass through many materials that absorb, or block, visible light. Because they are so energetic, X-rays can also be harmful to human tissue and cells, which is why we limit our exposure to them in medical settings. 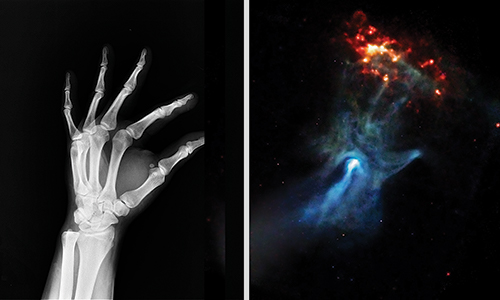 Left: A medical X-ray of a human hand (public domain); Right: A Chandra X-ray image of the pulsar B1509, nicknamed by the public as the “Hand of God” (NASA/CXC/SAO).

Fortunately for life on Earth, our atmosphere absorbs most of the X-rays from space, providing a sort of force field from what otherwise could be dangerous radiation. Because of this, scientists had to wait until the advent of the Space Age in order to explore the X-ray Universe as it needs to be done with telescopes above Earth’s atmosphere. Chandra, for example, was launched into its highly-elliptical orbit in space aboard the Space Shuttle Columbia in 1999.

To help celebrate the wonders of X-rays (and Halloween), we’ve put together a light-hearted selection of the amazing animals from the Oregon Zoo and some astronomical look-alikes that Chandra (along with some fellow telescopes, including NASA’s Hubble Space Telescope and the Spitzer Space Telescope) have observed in space. You might have to use your imagination to see some of the animals in our cosmic images, but we hope you’ll enjoy these pairings regardless.

There is always more than meets the eye, so keep exploring!

Left: Toco toucan; Right: NGC 602, young stars in the Small Magellanic Cloud, one
of the closest galaxies to our Milky Way. 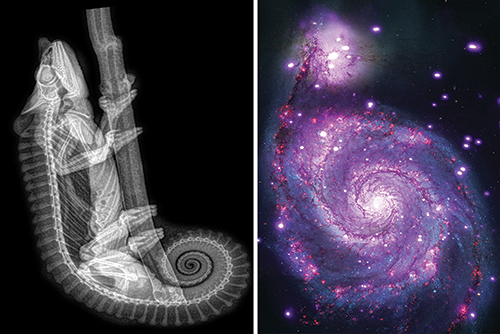 Left: Ball python; Right: A powerful jet from a supermassive black hole is blasting
a nearby galaxy in the system known as 3C321. 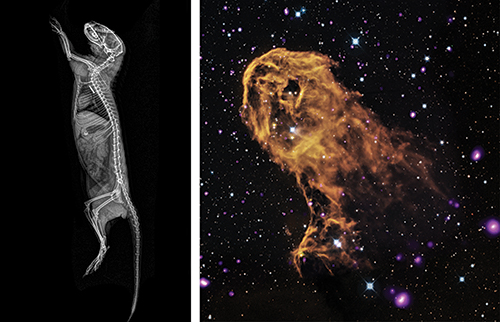 Left: Tiger’s paw; Right: "Pillars of Creation", a nearby star-forming region about
5,700 light years from Earth.

Editor’s note: No animals were harmed in the taking of these medical X-rays, as they were for routine health check-ups. Of course, no stars were harmed in the taking of the cosmic images either. Animal images used with permission from the Oregon Zoo. Finally, for a related article on finding patterns, see our blog post on “pareidolia” http://chandra.si.edu/blog/node/472