The Intermittent Growth of the First Supermassive Black Holes 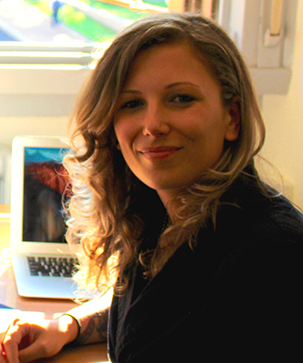 It is a pleasure to welcome Edwige Pezzulli as a guest blogger. Edwige led the black hole study that is the subject of our latest press release. She is a Ph.D. student at the University la Sapienza in Rome (Italy), under the supervision of Raffaella Schneider. During her Ph.D., she spent several months at the Institute d’Astrophysique de Paris (IAP) in France. She has mainly worked on the study of the origin and properties of the first black holes in the Universe.

“As an adult, I’d like to be sent into a black hole!” This is my first memory from childhood on the topic of space.

Since then, I have studied and discovered a lot more about black holes, and yet they still fascinate me in the same way. Considered, for many, the most exotic objects ever discovered, supermassive black holes are the tip of the iceberg of the “dark” side of the Universe. Supermassive black holes are behemoths located in the centers of galaxies and can be among the most luminous sources ever known, from the radiation of surrounding material.

In particular, observations of the Universe’s earliest supermassive black holes, with masses about a billion times that of the Sun, open the door to many questions, especially this one: how did these monsters form in such a short time?

Astronomers find black holes with similar masses in the present-day universe, but these black holes have grown to their enormous size over a much longer period of time – about 13.8 billion years – compared to those that formed about a billion years after the Big Bang. In order to tackle the question of how supermassive black holes formed in the very early Universe, it is imperative to make numerous observations of the light they generate while pulling in, ie accreting, matter as they grow.

In our Universe, smaller structures are born first, and then, through merging with other structures and accretion of matter from the surroundings, they start forming bigger galaxies. Black holes follow the same path: starting from the “seeds,” they grow up through accretion of gas and coalescence with others of their kind. 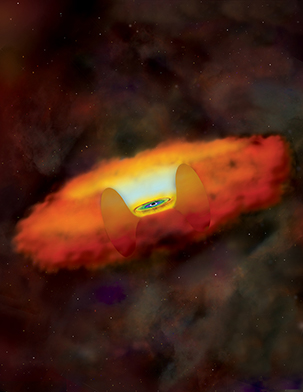 Illustration of a disk around a black hole

Seeds of the first black holes could form after the collapse of a massive star, and in the early Universe they can be as massive as about a hundred times that of the Sun. However, starting from these stellar seeds, growing a supermassive black hole in less than one billion years is hard to explain since they would have to grow incredibly rapidly.

One issue is that there is a classical limit on how fast a black hole can grow – something called the “Eddington limit” where the outward pressure of radiation is balanced by the inward pull of gravity If the first population of supermassive black holes obey the Eddington limit, it is necessary to assume an uninterrupted accretion of gas since the moment they have formed. This, however, is quite unrealistic since black holes do not usually behave this way.

A possible solution comes from breaking this limit, and assuming properties of the surrounding gas for which very rapid, “super-Eddington” black hole growth occurs spontaneously. In this case, short periods of powerful activity are followed by long times of quiescence.

From an observational point of view, the first black holes are detectable only when surrounding material is emitting copious amount of radiation. This process is driven by accretion of mass since non-swallowing black holes are invisible. Looking at the signs of these first giants’ growth is necessary to discriminate between different possible histories, and X-rays are an excellent way to track these growing black holes. Despite superb space-based X-ray telescopes like Chandra and ESA’s XMM-Newton in operation today, supermassive black holes have proved to be very elusive in the first billion years after the Big Bang and no sure traces of their growth have been found.

We addressed this issue by modeling the evolution of the first supermassive black holes, following the properties of their ancestors along the “family” tree. The code used for this scope, GAMETE/QSOdust (GAlaxy and Merger Tree Evolution/Quasi-Stellar Object dust), allows us to simulate black holes and their host galaxies. In this simulation, we can leave the black holes free to grow and also exceed the Eddington limit. Furthermore, we developed a model predicting the radiation produced by accreting black holes at any given frequency. This allowed us to forecast how early black hole ancestors shined, and compare our results with observations.

Our simulations showed that progenitors — that is, objects that develop into black holes — could have ingested gas intermittently with rapid bursts of accretion in which they are able to feed on all the surrounding matter.
These bursts of growth would have produced enough light in X-rays to be observed by current surveys. However, after the fireworks of rapid growth, the environment is left bare and so black holes will stop actively consuming material and become dormant.

Looking at the entire population of black hole progenitors, our model predicts a very low fraction of those are active. We estimate that 13 billion years ago only about a third of black holes were actively accreting and, thus, emitting any light that we can detect, including X-rays. About 200 million years earlier only 3% of the black holes were actively eating. In other words, the probability of actually finding them active is low.

Super-Eddington growth, which is the dominant “mode” in our simulation, is able to explain not only the existence of the first supermassive black holes, but also the current lack of luminous markers left by their progenitors. They should be bright enough to be seen by available instruments, but they are rare.

Our results give some suggestions on how to optimize the search for these massive objects, summarized in the figure. The specific way of spanning a small region of the sky with deep observations is clearly not the best strategy. For this purpose, it would be best to cover wider regions, even with shallower sensitivities to detect these early supermassive black holes.

The research on the first supermassive black holes formed in the Universe is far from being accomplished, and many scientists actively work on this issue with different point of views.

“Why don’t we see them?” is the original question that gave us the motivation to collaborate together, giving rise to what unfortunately is still a rarity in astrophysics: an all-female research team. The attention is captured by this detail, drawing a clear framework in which science still moves, and none of us are entirely stereotype-free. The key to progress resides in cooperation and diversity plays a fundamental role. For this reason, the advance of science needs to go hand in hand with overcoming any gender gap, making an uncommon all-female team become a common phenomenon.

Figure 1: Number of progenitors of a supermassive black hole in the early Universe with a soft X-ray flux (the observed amount of X-rays with relatively low energies) larger than F (y-axis) observable with a survey covering an area of the sky A (x-axis). Credit: E. Pezzulli et al. 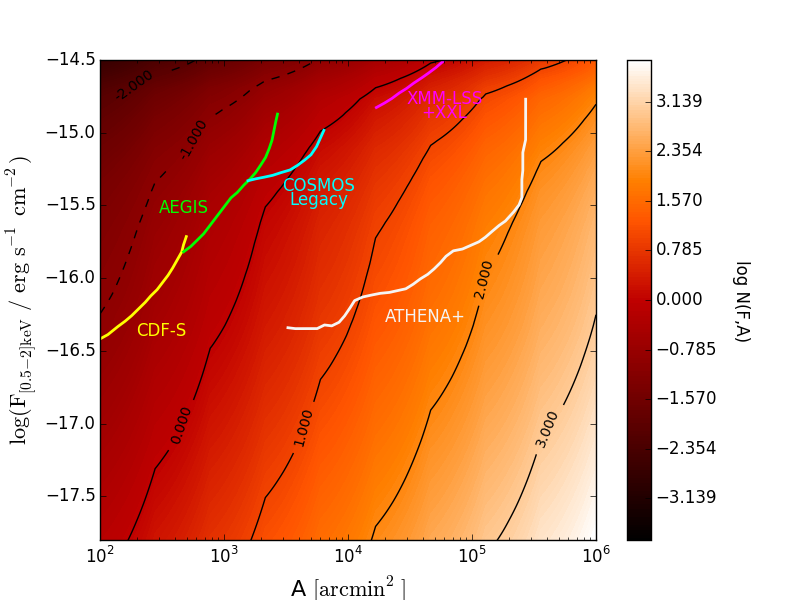