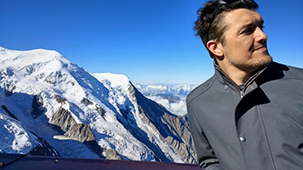 It is a pleasure to welcome Franz E. Bauer as a guest blogger. Franz led the study that is the subject of our latest press release. He is an associate professor at Pontificia Universidad Catolica de Chile in Santiago, Chile, where his group studies the cosmic evolution of star-forming galaxies and supermassive black holes, as well as a variety of transient phenomena. He completed his PhD at the University of Virginia in 2001, then worked at Pennsylvania State University, University of Cambridge (UK), and Columbia University before finally moving to Chile.

Like many discoveries in astrophysics, the subject of our recent study was an act of serendipity. Our large international collaboration had been allocated a series of long observations with Chandra to push the exposure from 45 days to 75 days for the deepest X-ray image on the sky to date, the Chandra Deep Field-South (CDF-S). The primary goal of this project was to explore the poorly understood realm of the ultra-faint X-ray universe, to learn how supermassive black holes form in the early Universe and by what mechanisms they grow to become the present day "monsters" that we see today (for details, see a January 2017 press release led by Bin Luo from Nanjing University and Fabio Vito from Penn State University and an associated blog post by Fabio Vito). However, the leaders of this project, colleagues Drs. Niel Brandt (Penn State University) and Bin Luo, had studied variability from known X-ray objects in the previous data containing 45 days of exposure, and were thus monitoring the individual observations as they arrived to check for large deviations.

To our surprise, during one 13-hour observation on October 1st, 2014, a bright, new source emerged (see Figure 1), at a location where no source had been detected, even when summing up all of the previous exposures together. Two days later, in the next Chandra observation, it was gone! We had never anticipated that our observations would capture such a rare, fast transient. After convincing ourselves that it was not some weird instrumental effect, we reported it to the astronomy community as Luo, Brandt & Bauer (2014) in ATEL 6541, to encourage follow-up observations at other wavelengths and gain more clues as to the origin of this unique event.

Matching the X-ray source position against extremely deep optical and near-infrared images already obtained from the Hubble and Spitzer Space telescopes, we found that the X-ray transient appears to originate from a distant, faint dwarf galaxy (see Figure 2); the probability of such an alignment by chance is only 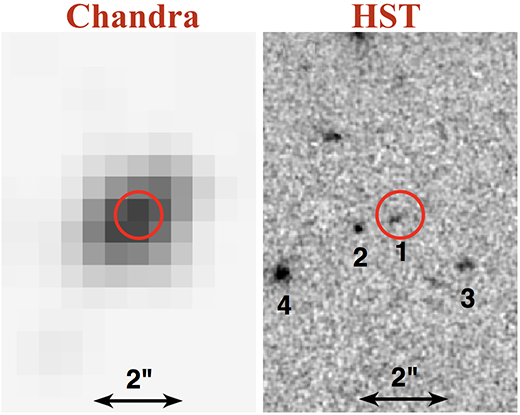 Figure 2: A close-up of the Chandra X-ray image (left) of the CDF-S showing the transient source and an optical HST image (right) of the same field, where the red circle shows the position of the X-ray transient. The faint object inside the circle is a distant galaxy that is the likely host of the transient. Credit: X-ray: NASA/CXC/Universidad Catolica de Chile/F.Bauer et al.; Optical: NASA/STScI.

As luck would have it, the Very Large Telescope (VLT) in Chile had imaged this field for completely different reasons on the same night — October 1st, 2014 — roughly 80 minutes into the X-ray outburst. Intriguingly, no new optical source was visible. Our team initiated several more follow-up optical observations on the VLT, the Gemini-South Telescope, and ultimately the Hubble Space Telescope, covering a span of days to months. Yet in all of these deep images, we found no new optical emission associated with the X-ray transient. This immediately rules out several possibilities for the origin of the transient.

In the end, the X-ray light curve (Figure 3) and spectrum properties, the lack of multi-wavelength counterparts, and the host galaxy identification still allow a few possible origin scenarios, in order of decreasing probability: (1) an off-axis view of a short-duration gamma-ray burst (GRB), which are thought to be collimated ("jetted") emission arising from the merger of two compact stellar end-products (for instance, two neutron stars, or a black hole and a neutron star); (2) a white dwarf that is torn apart by an intermediate-mass black hole (called a tidal disruption event), producing radiation from a jet that is moving at a significant fraction of the speed of light, or (3) a long-duration GRB, which are thought to be jetted emission associated with the explosion of a massive star undergoing a core-collapse supernova. To explain the CDF-S transient, such a GRB would have to be located very far behind the apparent host galaxy and either produce lower-than-expected amounts of light or be viewed off-axis. Note that each of these explanations requires considerable fine-tuning of parameters to explain the CDF-S transient.

Figure 3: The variation in X-ray brightness of the transient as a function of time. The Chandra data are shown in black, while a smoothly declining model is shown as a red dashed line. Credit: NASA/CXC/Universidad Catolica de Chile/F.Bauer et al.

Regarding scenario (1), with short-duration GRBs we expect the merger to create a sharply beamed pulse of gamma-ray photons lasting less than ~2 seconds, followed by weaker, more isotropic and fading radiation at X-ray (and sometimes longer) wavelengths (known as an "afterglow"). If an observer is not in the line of site of the initial burst, they will only see the weaker X-ray afterglow (dubbed an "orphan" afterglow). Although theoretical predictions suggest there should be numerous orphan afterglows, as yet there are no significant detections. The CDF-S X-ray transient shares several similarities with orphan afterglows, and thus could be the first true detection. However, its X-ray luminosity is at least a factor of 10-100 lower than predictions, leading to large uncertainties about how to reconcile it with theory.

Regarding scenario (2), tidal disruption events occur when a stellar-mass object gets too close to a massive black hole and is ripped apart (i.e., the gravitational force toward the black hole at the object's surface overcomes the self-gravity of the orbiting object). As the disrupted material accretes onto the black hole, it heats up and emits copious amounts of radiation. Depending on the masses of both the massive black hole and the stellar object, as well as their orbital parameters, a wide variety of emission peak times and wavelengths can be produced. To get a peak at ~100 seconds in the X-ray band, the stellar object needs to be extremely compact and disrupt very close to the black hole's event horizon. This scenario can only really happen for a stellar object known as a white dwarf (a compact dead star with 0.5-0.8 times the mass of the Sun; something similar to what our Sun will end its life as) falling into an intermediate mass (1,000-100,000 solar masses) black hole. However, this particular combination only generates about 0.1-1% of the energy that we observe. One way to reconcile this with the CDF-S X-ray transient is to invoke relativistic beaming, a rare phenomenon whereby accretion drives a jet traveling at close to the speed of light. This can boost the signal by factors of ~100-1000, if our viewpoint is lucky enough to align with the jet. In the few instances where this effect has been observed to date, the boosting is usually accompanied by strong variability in the X-ray emission, whereas we see a relatively smooth decline (denoted by the red dashed line in Figure 3).

And then there is scenario (3) involving a long-duration GRB. Here, we expect a beamed pulse of gamma-ray photons lasting between ~5-100 seconds, again followed by afterglow emission at X-ray, optical, and radio wavelengths like in the short GRB case. In order to hide the optical afterglow below our observed limits, the long GRB must have originated far behind the apparent host galaxy (at least 4 times further way!), such that the emission was redshifted — where light is stretched into longer wavelengths — out of the optical and into the infrared band. These are relatively rare GRBs, so it would be a very lucky find. Another complication is the typical GRB X-ray afterglow luminosity, which should be 10-100 times brighter than what we observe for the CDF-S transient. To accommodate this, the event would need to be under-luminous or off-axis, like the short GRB case. Finally, there is the near perfect alignment with the aforementioned host galaxy; compounding this with the rarity of a distant GRB implies that this scenario is quite unlikely (perhaps ~0.01% chance).

Unfortunately there is no "smoking gun" evidence that favors one scenario over the other here, and thus our only remaining chance to understand the CDF-S transient is to find similar events in old or new X-ray data from Chandra and other X-ray satellites. 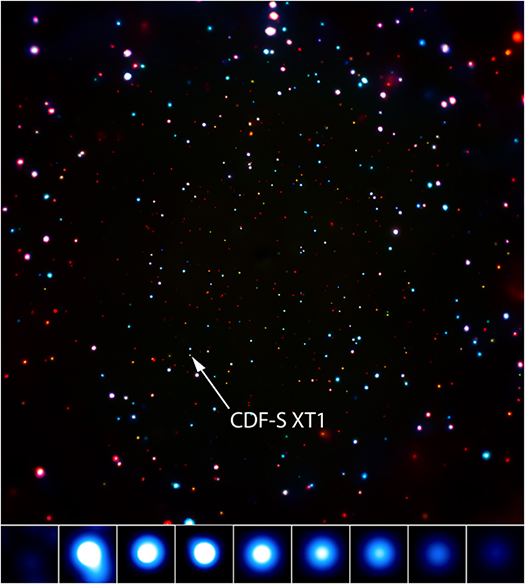 Category:
Cosmology/Deep Field
Disclaimer: This service is provided as a free forum for registered users. Users' comments do not reflect the views of the Chandra X-ray Center and the Harvard-Smithsonian Center for Astrophysics.
Please note this is a moderated blog. No pornography, spam, profanity or discriminatory remarks are allowed. No personal attacks are allowed. Users should stay on topic to keep it relevant for the readers.
Read the privacy statement