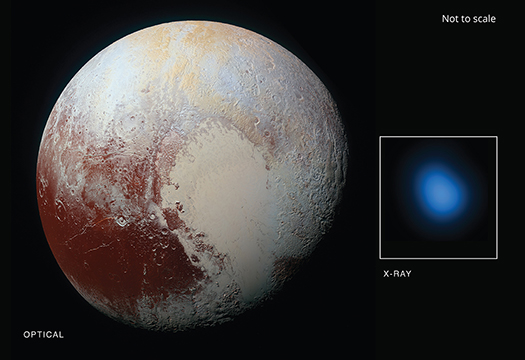 The first detection of Pluto in X-rays has been made using NASA's Chandra X-ray Observatory in conjunction with observations from NASA's New Horizon spacecraft. As reported in our press release this result offers new insight into the environment surrounding the largest and best-known object in the solar system's outermost regions.

As New Horizons approached Pluto in late 2014 and then flew by the planet during the summer of 2015, Chandra obtained data during four separate observations. During each observation, Chandra detected low-energy X-rays from the small planet. The main panel in this graphic is an optical image taken from New Horizons on its approach to Pluto, while the inset shows an image of Pluto in X-rays from Chandra.

There is a significant difference in scale between the optical and X-ray images. New Horizons made a close flyby of Pluto but Chandra is located near the Earth, so the level of detail visible in the two images is very different. The Chandra image is 180,000 miles across at the distance of Pluto, but the planet is only 1,500 miles across. Pluto is detected in the X-ray image as a point source, showing the sharpest level of detail available for Chandra or any other X-ray observatory. This means that details over scales that are smaller than the X-ray source cannot be seen here.

Detecting X-rays from Pluto is a somewhat surprising result given that Pluto - a cold, rocky world without a magnetic field - has no natural mechanism for emitting X-rays. However, scientists knew from previous observations of comets that the interaction between the gases surrounding such planetary bodies and the solar wind - the constant streams of charged particles from the Sun that speed throughout the solar system -- can create X-rays.

The researchers were particularly interested in learning more about the interaction between the gases in Pluto's atmosphere and the solar wind. The New Horizon spacecraft carries an instrument designed to measure that activity up-close - Solar Wind Around Pluto (SWAP) - and scientists examined that data and proposed that Pluto contains a very mild, close-in bowshock, where the solar wind first "meets" Pluto (similar to a shock wave that forms ahead of a supersonic aircraft) and a small wake or tail behind the planet.

The immediate mystery is that Chandra's readings on the brightness of the X-rays are much higher than expected from the solar wind interacting with Pluto's atmosphere. The Chandra detection is also surprising since New Horizons discovered Pluto's atmosphere was much more stable than the rapidly escaping, "comet-like" atmosphere that many scientists expected before the spacecraft flew past in July 2015. In fact, New Horizons found that Pluto's interaction with the solar wind is much more like the interaction of the solar wind with Mars, than with a comet. While Pluto is releasing enough gas from its atmosphere to make the observed X-rays, there isn't enough solar wind flowing directly at Pluto at its great distance from the Sun to make them according to certain theoretical models.