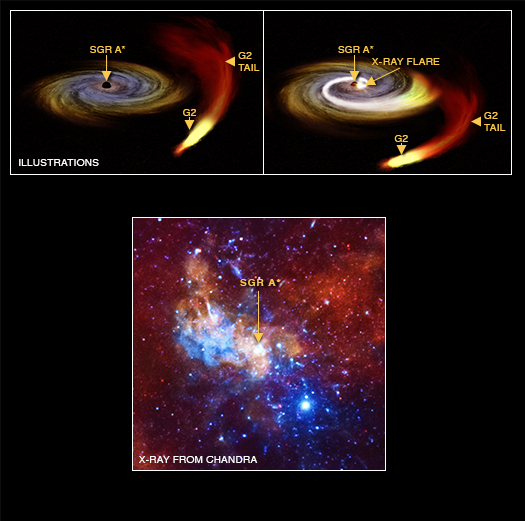 Three orbiting X-ray telescopes have been monitoring the supermassive black hole at the center of the Milky Way galaxy for the last decade and a half to observe its behavior. This long monitoring campaign has revealed some new changes in the patterns of this 4-million-solar-mass black hole known as Sagittarius A* (Sgr A*).

The bottom panel of this graphic is a view of the region around Sgr A* where red, green, and blue represent low, medium, and high-energy X-rays detected by NASA's Chandra X-ray Observatory. Sgr A* itself is not visible in this image, but is embedded in the white dot at the end of the arrow. The other two telescopes involved in the 15 years of X-ray observations were ESA's XMM-Newton and NASA's Swift Gamma Ray Burst Explorer, but their data are not included in this image.

Within the past year, the usually quiet black hole has shown an increased level of X-ray flares over its typical rate. This surge in X-ray flares coincides with the passage close to Sgr A* of a mysterious object called G2. Astronomers have been tracking G2 for years, originally thinking it was an extended cloud of gas and dust. However, after passing close to Sgr A* in late 2013 its appearance did not change much, apart from being slightly stretched by the gravity of the black hole. This led to new theories that G2 was not a gas cloud, but instead a star or pair of stars within an extended dusty cocoon.

If the G2 explanation does explain the recent rise in X-ray flares, it would be the first sign of excess material falling onto the black hole because of the cloud's close passage. Some gas would likely have been stripped off the cloud, and captured by the gravity of Sgr A*. It then could have started interacting with hot material flowing towards the black hole, resulting in an enhanced feeding rate and the production of X-ray flares. This scenario is depicted in the artist's illustrations found in the upper two panels of the graphic.

While the timing of G2's passage with the surge in X-rays from Sgr A* is intriguing, it is not yet an open-and-shut case. That is because astronomers see other black holes that appear to have behavior similar to the most recent increase of activity from Sgr A*. Therefore, it's possible this increased chatter from Sgr A* may be a common trait among supermassive black holes and unrelated to G2. Instead, it could represent, for example, a change in the strength of winds from nearby massive stars that are feeding the black hole.