We are delighted to welcome a trio of guest bloggers to discuss their work related to the newest Chandra press release on star clusters and star formation. Konstantin Getman, Eric Feigelson, and Michael Kuhn are colleagues at Penn State University and are all involved in the Massive Young Star-Forming Complex Study in Infrared and X-ray (MYStIX) project led from that institution. 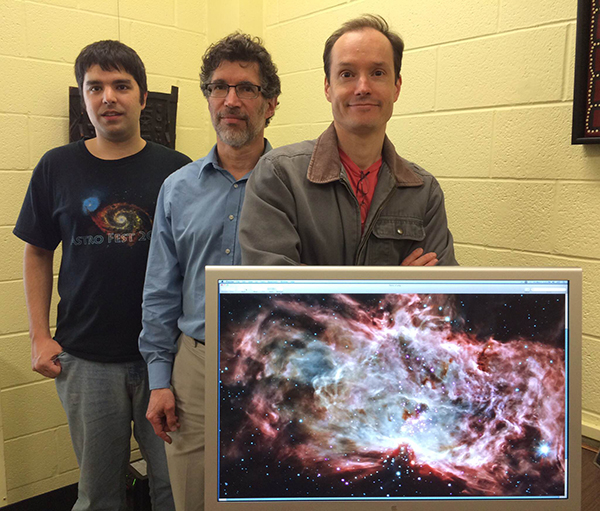 For decades there has been much debate about how clusters of stars form from molecular clouds. In the simplest case of a small gravitationally collapsing cloud, a single star cluster ’rapidly’ forms during a few hundred thousand years. But in the case of star formation distributed in a filamentary and turbulent cloud, which may be more realistic for giant molecular clouds, multiple small clusters may form over a period of million(s) of years, later interacting and merging to form a single massive star cluster.

Wide age spreads for young stars in clusters are found using traditional age methods, and would seem to support the slow mode of star formation. For instance, recent optical studies of the nearest rich young stellar cluster, the Orion Nebula Cluster (ONC), often considered to be a benchmark of star formation, based on the optical ground-based and Hubble Space Telescope data find that the cluster has a mean age of around 2 million years and an age spread of 2-3 million years around the mean. However, several problems affect the age estimate analysis in ONC. Firstly, the optical data are blinded by the bright gas near the cluster core, thus missing many stellar members in the center. Secondly, the age estimates for individual stars could be highly uncertain. It thus can be difficult to disentangle real astrophysical ages from the observed age spread in the cluster.

In this context, we present a new estimator of pre-main sequence stellar ages derived from X-ray and near-infrared (NIR) properties of young stars that can be applied to more distant and obscured clusters than the nearby ONC. The method is also less sensitive to Galactic field stars and bright background light from the nebula. When applied to the ONC, our Chandra-based sample has nearly uniform sensitivity to young stars across the entire cluster. And instead of evaluating the age spread for individual stars, we estimate median ages of stars in rings at different distances from the center of the cluster (Figure 2). By doing so we discover that the core of the ONC cluster is younger (1.2 million years old) than the halo of the cluster (about 2 million years old). We obtain even more dramatic results – with a core only 0.2 Myr old – for the second-richest cluster in the Orion Molecular Clouds, NGC 2024 associated with Flame Nebula.

The first implication of our results is that age spreads in young stellar clusters are real: they do not arise from a single nearly-instantaneous burst of star formation. If clusters truly formed exceedingly rapidly, our age estimates for different cluster subregions would be similar. Our results, however, do not specify a precise mechanism of asynchronous formation. Perhaps star formation continues longer in the core region, accelerating until the gas is depleted. Perhaps gaseous filaments feed material for continued star formation into the core. Perhaps older stars are ejected into the cluster halo during subcluster mergers. Or perhaps all of these mechanisms are involved.

We hope that computer simulations of the movement of cloud material and newborn stars can now focus on reproducing our results for the Orion and Flame Nebula clusters to give realistic understanding of cluster formation processes. And we will extend our empirical studies to other rich young stellar clusters in the solar neighborhood.

Figure 2: Chandra images of the ONC (left) and NGC 2024 (right) young stellar clusters. Rings at different distances from the centre of the cluster used in our age analysis are marked by the ellipses of different colors. The numbers state our derived median ages for the stars (in million years) within the different rings of the clusters.