X-rays from a Reborn Planetary Nebula 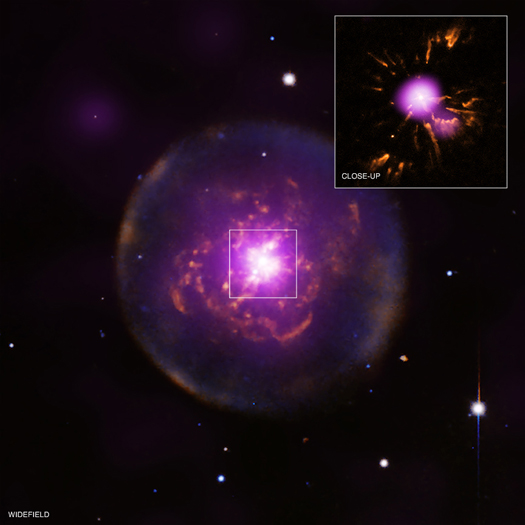 These images of the planetary nebula Abell 30, (a.k.a. A30), show one of the clearest views ever obtained of a special phase of evolution for these objects. The inset image on the right is a close-up view of A30 showing X-ray data from NASA's Chandra X-ray Observatory in purple and Hubble Space Telescope (HST) data showing optical emission from oxygen ions in orange. On the left is a larger view showing optical and X-ray data from the Kitt Peak National Observatory and ESA's XMM-Newton, respectively. In this image the optical data show emission from oxygen (orange) and hydrogen (green and blue), and X-ray emission is colored purple.

A planetary nebula - so called because it looks like a planet when viewed with a small telescope - is formed in the late stage of the evolution of a sun-like star.

After having steadily produced energy for several billion years through the nuclear fusion of hydrogen into helium in its central region, or core, the star undergoes a series of energy crises related to the depletion of hydrogen and subsequent contraction of the core. These crises culminate in the star expanding a hundred-fold to become a red giant.

Eventually the outer envelope of the red giant is ejected and moves away from the star at a relatively sedate speed of less than 100,000 miles per hour. The star meanwhile is transformed from a cool giant into a hot, compact star that produces intense ultraviolet (UV) radiation and a fast wind of particles moving at about 6 million miles per hour. The interaction of the UV radiation and the fast wind with the ejected red giant envelope creates the planetary nebula, shown by the large spherical shell in the bigger image.

In rare cases, nuclear fusion reactions in the region surrounding the star's core heat the outer envelope of the star so much that it temporarily becomes a red giant again. The sequence of events - envelope ejection followed by a fast stellar wind - is repeated on a much faster scale than before, and a small-scale planetary nebula is created inside the original one. In a sense, the planetary nebula is reborn.

Category:
White Dwarfs & Planetary Nebulas
Disclaimer: This service is provided as a free forum for registered users. Users' comments do not reflect the views of the Chandra X-ray Center and the Harvard-Smithsonian Center for Astrophysics.
Please note this is a moderated blog. No pornography, spam, profanity or discriminatory remarks are allowed. No personal attacks are allowed. Users should stay on topic to keep it relevant for the readers.
Read the privacy statement