For those of you who don’t like acronyms (or who don't work for the government), the title of this post is probably indecipherable. It does, however, have quite a bit of meaning.

The translation into English is "Smithsonian Astrophysical Observatory and National Air and Space Museum makes "From Earth to the Solar System at the Smithsonian Institution."

Many people don't know that the "Smithsonian" is not one single entity. Rather, it encompasses 19 museums and galleries, the National Zoo, and nine research facilities.

NASM is one of the world's most popular museums, and obviously falls into one of SI's nineteen in that category. SAO certainly qualifies as one of Smithsonian’s flagship research facilities. 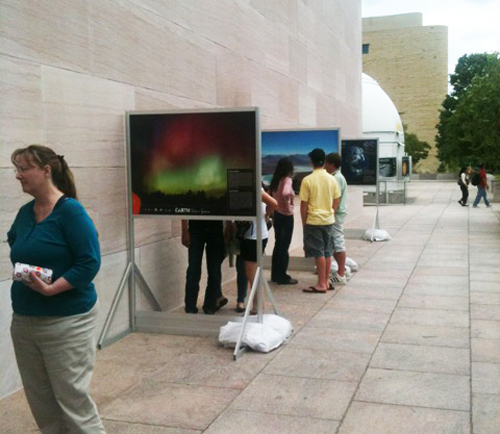 The relationship between SAO and NASM has always been important, but recently we've been able to collaborate on several new projects. This includes the latest, "From Earth to the Solar System," which is now on display on the Independence Avenue side of the museum.

So even if you aren't planning on going into NASM on your next visit to the DC area, think about swinging by for a peek at FETTSS, which will be on display (for free and without having to go through any security) through July 11. Use this opportunity to see what alphabet soup can really do when it is arranged correctly.