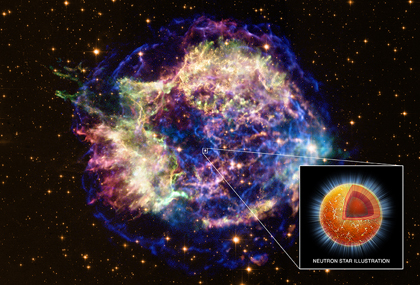 This composite image shows a beautiful X-ray and optical view of Cassiopeia A (Cas A), a supernova remnant located in our Galaxy about 11,000 light years away. These are the remains of a massive star that exploded about 330 years ago, as measured in Earth's time frame. X-rays from Chandra are shown in red, green and blue along with optical data from Hubble in gold.

At the center of the image is a neutron star, an ultra-dense star created by the supernova. Ten years of observations with Chandra have revealed a 4% decline in the temperature of this neutron star, an unexpectedly rapid cooling. Two new papers by independent research teams show that this cooling is likely caused by a neutron superfluid forming in its central regions, the first direct evidence for this bizarre state of matter in the core of a neutron star.

The inset shows an artist's impression of the neutron star at the center of Cas A. The different colored layers in the cutout region show the crust (orange), the core (red), where densities are much higher, and the part of the core where the neutrons are thought to be in a superfluid state (inner red ball). The blue rays emanating from the center of the star represent the copious numbers of neutrinos -- nearly massless, weakly interacting particles -- that are created as the core temperature falls below a critical level and a neutron superfluid is formed, a process that began about 100 years ago as observed from Earth. These neutrinos escape from the star, taking energy with them and causing the star to cool much more rapidly.