Hub of the Universe

Everyone around here knows that Boston likes to consider itself the "Hub of the Universe". This month, it really is. Opening this weekend, two outdoor exhibitions â€“ at the Museum of Science and UMass-Boston â€“ will help Bostonians explore their place in the cosmos.

Those of you who are regularly readers of the Chandra blog already have heard a great deal about this project. But for the rest of you, here's some background. 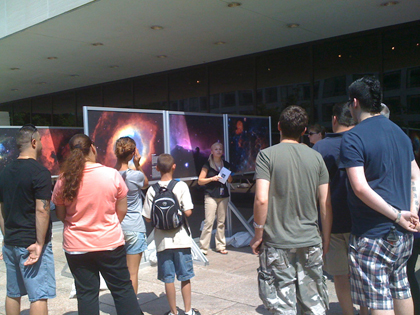 A previous stop of the traveling exhibit, in Washington DC

The "From Earth to the Universe" project (FETTU) is a collection of images from astronomy, ranging from our home planet, through the Galaxy, to the farthest corners of the Universe. These images contain data from both telescopes on the ground and those in space that observe in many different types of light â€“ from radio to optical to X-rays and beyond.

The goal of FETTU is to engage the public â€“ especially those who might not think they are interested in astronomy or science â€“ through the stunning beauty of astronomical images displayed in large-scale prints. Short and informative captions on the panels in English and Spanish, as well as a comprehensive website, are available to help the viewer become more familiar with the science behind the aesthetics.

The arrival of this project in Boston is due to a special anniversary (regular blog readers know about this already as well). NASA's Chandra X-ray Observatory, the sister mission to the Hubble Space Telescope, celebrates ten years in orbit around the Earth this year. Through its ability to detect X-ray light from space, Chandra has made discoveries on such topics as black holes, exploded stars, and dark matter. The operations and control center for Chandra is located at the Harvard-Smithsonian Center for Astrophysics in Cambridge, Mass.

The FETTU project, which has generated over 250 separate exhibits in over 65 countries around the world, was designed and led by a team at the Chandra headquarters. The FETTU exhibits will be on display at the two Boston locations through the month of September. A separate tactile exhibit for the visually impaired community will also be on display at UMass-Boston.