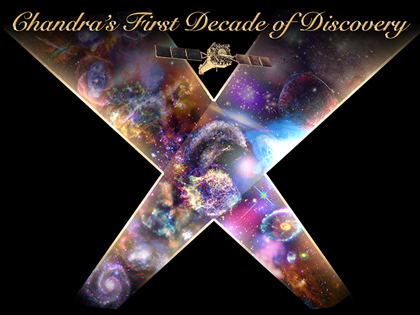 It's been ten years since Chandra was launched. A decade is a long time for a spacecraft, or any other complex machine, to operate without maintenance. Hubble has been up 18 years (launch 1991), but it has had regular maintenance with five Space Shuttle crews putting in new instruments and replacing worn out old parts. Chandra, on the other hand, was deliberately placed where the Shuttle couldn't service it. So Chandra's not doing badly considering there will be no 200-million-mile/10-year tune up!

Just before the Chandra launch, Sky & Telescope magazine published my prediction that Chandra would start a revolution in astronomy. How did that work out? Pretty good. Here's my short list of big time discoveries:

From the dark side:
*Dark Energy has to be a big force in the Universe, otherwise galaxy clusters, which glow brightly in X-rays from the hot gas that fills the spaces between the galaxies, would be far more plentiful than Chandra observes.
* Dark Matter is real and unconnected with the 'normal matter' (such as we are made of), or Chandra would not have found the hot gas knocked off-center in a collision of two clusters (the "Bullet Cluster").
* Dark Baryons (= normal matter we can't see) is hiding as a tenuous hot gas that is seen only because it absorbs light at one specific wavelength that Chandra is sensitive to. [Right now, this discovery badly needs confirmation.]

Black Hole Surprises:
* We thought that most all galaxies had a black hole at their centers, but Chandra showed that some greedy galaxies have a pair of supermassive black holes near their centers.
* Quasar black holes have one million mile per hour winds coming from really close in.
* What stops the hot gas in clusters of galaxies cooling and falling in to the center? Jets of high-energy plasma being shot out from really near the black hole at the center of the central galaxy in the cluster, heating the X-ray hot gas and pushing it out of the way.
* Our Milky Way has a central black hole, and it has burps of X-rays coming from it almost daily; it has also gathered around it several smaller black holes, which we see because they are in binary star systems, in a region smaller than the distance from us to the nearest star.

This short sample of discoveries is all things that it took Chandra to see. Without the fine detail of Chandra's pictures, all this becomes invisible.

Let's hope we don't lose our X-ray sight for a long time yet.