In its relatively short 50 year history, the field of X-ray astronomy has shed a whole new light on our view of the universe, and has seen a dizzying rate of technological advancement. Prior to the 1960's, only the Sun was a known source of high energy radiation in X-rays and gamma-rays. These wavelengths of light are absorbed by Earth's atmosphere, so X-ray astronomy depended on advancements in rocketry and space science to be fully explored. The first detection of extra-solar X-rays occurred during a rocket flight in 1962, from an X-ray bright source in the constellation of Scorpius, dubbed "Sco X-1".

Almost 16 years later in the late 1970's, NASA launched a series of scientific instruments into Earth orbit, known as the High Energy Astronomy Observatories (HEAO). The second of these observatories, HEAO-2, later renamed Einstein, was the first fully imaging, space-based X-ray observatory. With an angular resolution of 3 to 5 arcseconds, Einstein was capable of resolving shock wave structures in the X-ray emission of supernova remnants, as well as detecting the hot gas in galaxies and galaxy clusters. It resolved and accurately located over 7000 X-ray sources, including stellar coronas, X-ray binaries, galaxies and quasars and showed that most of the X-ray background is due to discrete sources.

Over the course of the next 20 years, development of the Advanced X-ray Astrophysics Facility (AXAF), which would eventually come to be known as the Chandra X-ray Observatory moved at a slow but steady pace. Moore's Law comes to mind when discussing the advancements made over this time. (Moore's Law is a long-term trend in computing hardware stating that computing power doubles roughly every two years.) In the 36 years between the first detection of extra-solar X-rays, and the launch of Chandra in 1999, the sensitivity of X-ray detectors had increased by 10 orders of magnitude. This sensitivity improvement is comparable to that in going from naked-eye observations to the Hubble Space Telescope over the past four centuries!

Chandra's superb angular resolution of just 0.5 arcseconds coupled with increased detector sensitivity has literally transformed our understanding of the high-energy universe in the observatory's 11 years and counting in orbit
. Chandra is capable of making exquisitely detailed X-ray images of star clusters, supernova remnants, galactic eruptions, and collisions between clusters of galaxies. Chandra has probed the geometry of space-time around black holes, traced the dispersal of calcium and other elements by supernovas and revealed that whirling neutron stars only twelve miles in diameter can generate streams of high-energy particles that extend for light years. Chandra has found cosmic generators millions of times more powerful than neutron stars – rapidly spinning, supergiant black holes in the centers of galaxies. There, energy from the rotation of the black hole and surrounding gas is converted into powerful jets and winds that can influence the destiny of an entire galaxy.

It has been nearly 30 years since the Einstein observatory was decommissioned and eventually burned up on re-entry into Earth's atmosphere. To celebrate the accomplishments of this observatory and its contributions to X-ray astronomy, a team of scientists from the Harvard-Smithsonian Center for Astrophysics have recently digitized the entire contents of the Einstein Slide Collection. For the first time, we are able to provide an indexed archive of this observatory's stunning first snapshots of the X-ray universe. As a part of the Smithsonian's Archive Month 2010, we have selected a few illustrative examples of celestial objects viewed by both Einstein and Chandra to demonstrate in images rather than words the remarkable advancements of X-ray astronomy. 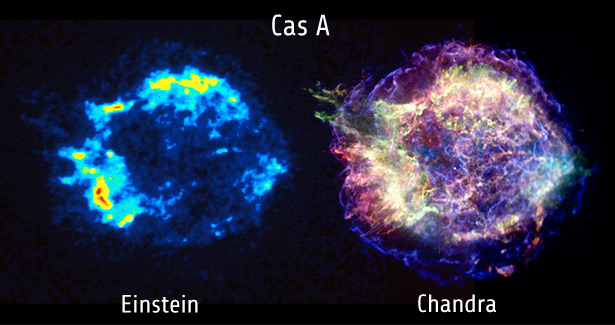 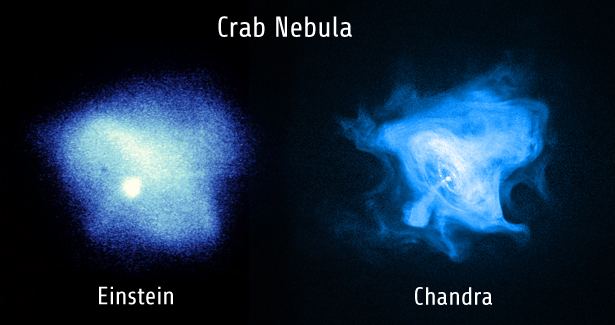 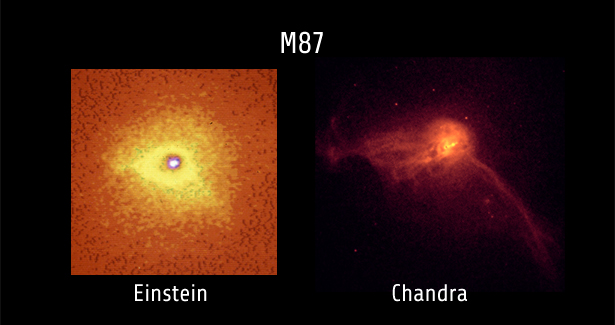