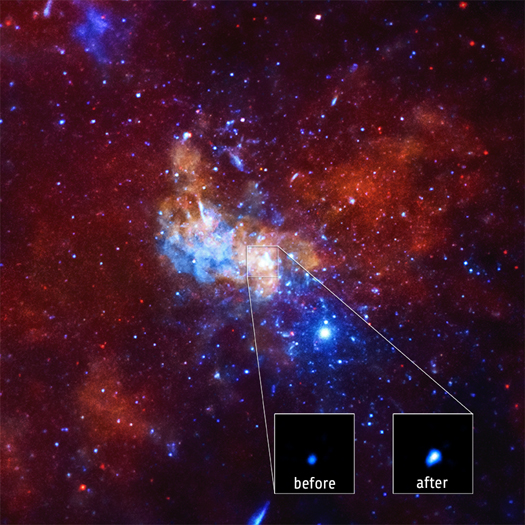 On September 14, 2013, astronomers caught the largest X-ray flare ever detected from the supermassive black hole at the center of the Milky Way, known as Sagittarius A* (Sgr A*). This event, which was captured by NASA's Chandra X-ray Observatory, was 400 times brighter than the usual X-ray output from Sgr A*, as described in our press release. The main portion of this graphic shows the area around Sgr A* in a Chandra image where low, medium, and high-energy X-rays are red, green, and blue respectively. The inset box contains an X-ray movie of the region close to Sgr A* and shows the giant flare, along with much steadier X-ray emission from a nearby magnetar, to the lower left. A magnetar is a neutron star with a strong magnetic field. A little more than a year later, astronomers saw another flare from Sgr A* that was 200 times brighter than its normal state in October 2014.

Astronomers have two theories about what could be causing these "megaflares" from Sgr A*. The first idea is that the strong gravity around Sgr A* tore apart an asteroid in its vicinity, heating the debris to X-ray-emitting temperatures before devouring the remains. Their other proposed explanation involves the strong magnetic fields around the black hole. If the magnetic field lines reconfigured themselves and reconnected, this could also create a large burst of X-rays. Such events are seen regularly on the Sun and the events around Sgr A* appear to have a similar pattern in intensity levels to those.

Sgr A* is about 4.5 million times the mass of our Sun and is located about 26,000 light years from Earth. Researchers have been using Chandra to monitor Sgr A* since the telescope was launched in 1999. Recently, astronomers have been closely watching Sgr A* to see if the black hole would consume parts of a nearby cloud of gas known as G2 and cause flares in X-rays. Due to G2's distance from Sgr A* at the time of the September 2013 flare, however, researchers do not think the gas cloud was responsible for the spike in X-rays.