Cold as Ice: X-rays from Comets

The last time I wrote a blog entry on the Sun was about two months ago. I noted that although the Sun had an outburst in August it was still fairly quiet. It remains fairly quite, although the sunspot numbers have been steadily creeping up for the last few months and there were four weak "C-class" flares last week. The observed rates are still only about two-thirds of the predicted values. In general, this has meant a quiet couple of months for spacecraft operations-at least as far as radiation response is concerned. 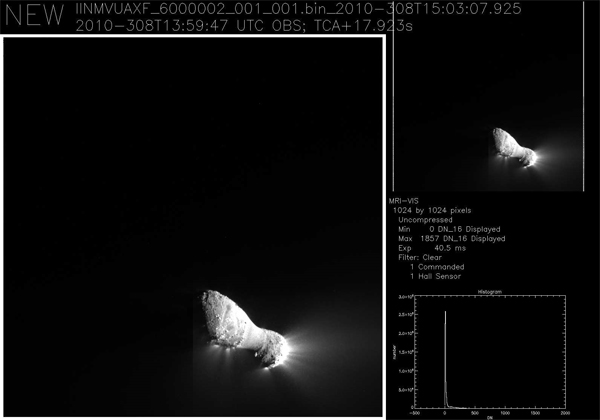 Of course, solar weather is more far-reaching effects than spacecraft operations. The most commonly observed manifestations of solar weather are the aurora (aka, the "Northern lights".) However, the one that I study as part of my scientific interests is how the solar wind interacts with comets.

X-rays are usually associated with some of the hottest objects in the Universe and exotic matter -- black holes, neutron stars and the like.
It is one of the wonders of the universe that, pound for pound, a dirty snowball may outshine them all!

This charge transfer, or "charge exchange," leaves the ion in a slightly less charged state, but with an electron that is barely attached. Like a wide receiver adjusting his grip on a football after a one-handed grab, the ion tightens its grip on the recently acquired electron. In scientific terms, the electron then relaxes to a “lower energy state.” This process gives rise to a photon that is usually either a high-energy ultraviolet photon or a low-energy X-ray.

Over the course of the Chandra mission, we have used charge exchange to study over a dozen comets. The first studies had the simple goal of understanding what physical process was taking place. The conclusion of these studies led us to the description I gave in the previous paragraph. Since then, we have used the cometary observations as a way to study the details how the solar wind interacts with particles in space, the upper atmospheres of planets -- even seeing the atmospheres of planets evaporating into space. We are now trying to understand at what level we could study these phenomena in planetary systems around other stars.

There have also been a few special case studies, one of which was Tempel-1, the comet that was visited by the Deep Impact mission in 2005. With our X-ray data taken with Chandra back in 2005, we were actually able to detect the jet of gas shot out of the comet in response to the impact and measure how much came out.

The main body of Deep Impact spacecraft (not the probe that intercepted Tempel-1) is still around, and on November 4 visited another comet known as P103/Hartley. This time the spacecraft is "unarmed" and has since been renamed EPOXI, but it still has all the sensors that were used to study Tempel-1.
Our group, Carey Lisse and Konrad Dennerl (two of first people who really thought to look at a comet in X-rays), Damian Christian and Dennis Bodewits (the guys who do the detailed analysis), was allocated almost a full day worth of Chandra observing time on the basis of a proposal we wrote to support the EPOXI flyby.

Our time was split up into three intervals: about six hours on October 17 (near the comet's closest approach to the sun,) about 11 hours around the time of the EPOXI flyby, and about six hours the week of November 17.

At this point we only have analyzed the data from the October 20 observation. The first thing the X-ray data tell us about is the gas leaving the comet. We are looking forward to finding out how the rate of out-gassing changes as the comet proceeds away from the Sun.

We will also be comparing our data to many ground-based observations of the dust and of particular molecular species. Usually a project like this takes about a year to 18 months to go from the data-taking phase to the final publication. But, in the meantime, we will try to post an image with the new data on the Chandra website in the upcoming weeks.