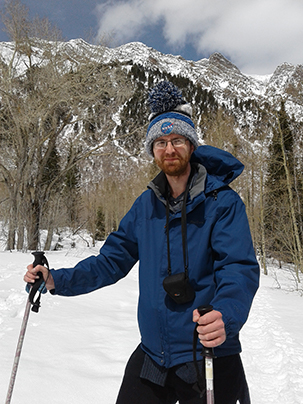 We welcome Stephen A. Walker, first author on our latest results from the Perseus galaxy cluster, as our guest blogger. Originally from the UK, Stephen received his PhD at the University of Cambridge, continuing there as a postdoc, before becoming a NASA Postdoctoral Program Fellow at NASA’s Goddard Space Flight Center.

The story begins in October 2010, when I started my PhD at the University of Cambridge. I was exploring new X-ray observations of the outskirts of galaxy clusters taken with Suzaku. Much like in a city, the outskirts are where clusters continue to grow outwards.

Galaxy clusters are the largest gravitationally bound structures of the universe, consisting of hundreds or thousands of galaxies. The total masses of clusters are colossal, reaching up to and beyond a million billion times the mass of the sun. The vast majority of the ‘normal’ matter in these clusters (like hydrogen and helium) does not actually lie in the galaxies themselves, but rather in an extremely hot and diffuse gas between the galaxies, called the intracluster medium.

As the largest gravitationally bound structures in the universe, galaxy clusters continue to grow and accrete matter from the surrounding cosmic web of gas produced by the Big Bang. When the infalling gas falls into their deep gravitational potential wells, it is shock heated to tens of millions of degrees, and begins to emit prodigiously in the X-ray band.

The immense gravity of galaxy clusters also causes them to attract other smaller clusters of galaxies. Any cluster unlucky enough to venture near a massive galaxy cluster will find itself pulled into it. After a cosmic dance lasting many billions of years, it will eventually merge, effectively being gobbled up by the main galaxy cluster.

But one thing that has become clear is that these ‘minor-mergers’ leave behind imprints into the intracluster medium, allowing us to unravel the history of clusters and other clusters that have fallen into them. The gravitational attraction between the cluster core and an infalling cluster causes the core to slosh around, much like wine being sloshed around in a wine glass. This produces a characteristic spiral pattern of 'cold fronts' where the gas density falls sharply, while its temperature rises. Simulations of this process find that this sloshing spiral pattern grows slowly outwards with time: the longer ago the sloshing started, the bigger the spiral can grow. 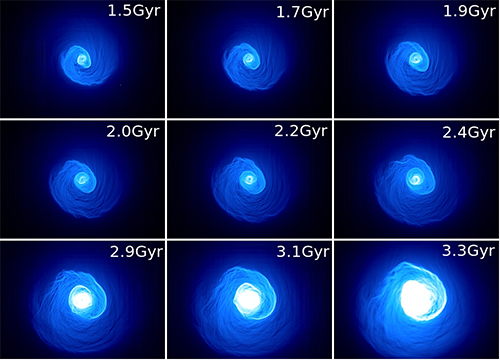 Simulations of the rising spiral pattern of cold fronts due to gas sloshing over billions of years.

During my PhD, one thing that became apparent from research into cluster outskirts was that this ‘sloshing’ is not restricted to the central regions of clusters, but can reach out to extremely large radii, around 2 million light years in the Perseus cluster, which is the brightest cluster in the X-ray sky due to its closeness and immense mass. In order to grow this large, I found that this sloshing must have started around 5 billion years ago, before the solar system even existed!

Early observations of this enormous cold front in Perseus were made using Suzaku and XMM-Newton, taking advantage of their large collecting areas. However these telescopes have poor spatial resolution, so while we could tell that large scale sloshing was happening, our pictures were very blurry and we could not properly see what was happening.

In 2016 I decided to rectify this by planning observations of Perseus’ enormous cold front with Chandra, which can see details around 20 times finer than XMM-Newton. While waiting for the observations to arrive, I grew fascinated by a bizarre structure seen in the innermost, younger cold fronts in the core of Perseus.

To try to understand this weird structure, I teamed up with John ZuHone at the Harvard-Smithsonian Center for Astrophysics, who has produced state-of-the-art simulations of this sloshing process, including the effects of magnetic fields. As the sloshing cold fronts spiral outwards, there is a velocity shear between the gas inside and outside the spiral. This is susceptible to what are called Kelvin-Helmholtz instabilities, which should erode away and deform the cold fronts with time. The cluster magnetic field on the other hand can wrap around the cold fronts like a blanket, and strongly suppress these instabilities, helping the cold fronts to survive. By comparing to John’s simulations I found that the unusual structure seen in the central, young cold fronts could be explained by a single large Kelvin Helmholtz instability which the magnetic field was not strong enough to suppress.

So what would the new data of the much larger, ancient cold front show? Over it’s 5 billion year history, would it have completely disintegrated into instabilities? Would diffusion and thermal conduction have smoothed out the cold front edges? Finally, towards the end of 2016, my new Chandra data arrived, and the answers to these questions were revealed.

What Chandra revealed is that, despite it’s immense age, the cold front not only remains intact but is just as sharp as the much younger cold fronts in the cores. Over it’s 5 billion year long journey, in which it has travelled 10 billion billion miles, the cold front has survived unscathed from the effects of instabilities, turbulence, diffusion and thermal conduction. This shows that the magnetic field blanketed over the cold front is strong enough to protect it from this onslaught. In fact, rather than being eroded, the cold front has actually split into two separate cold fronts, each razor sharp. Comparing to John’s simulations of this sloshing, we find that this splitting is consistent with a type of 'hook' shaped instability which may have formed back in it's youth, and which has also survived and grown for billions of years.

So really the story behind this paper started all those billions of years ago, when an unfortunate interloper falling into Perseus set into motion a cosmic dance that still plays on today, twirling and swirling against the silent backdrop of space.